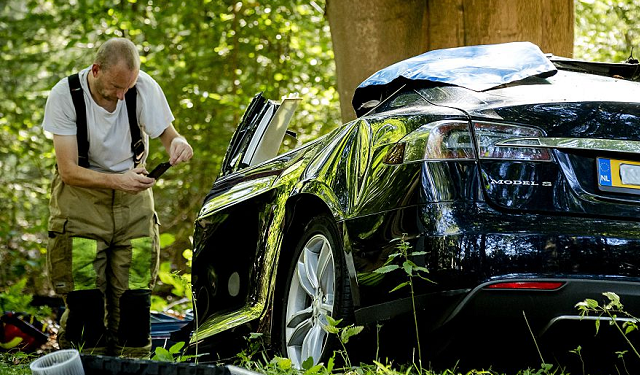 AP reports the National Highway Traffic Safety Administration (NHTSA) cautioned against using the numbers to compare automakers, saying it didn’t weight them by the number of vehicles from each manufacturer that use the self-drive systems, or how many miles those vehicles traveled.

Automakers reported crashes from July of last year through May 15 under an order from the agency, which is compiling the statistics for the first time.

“As we gather more data, NHTSA will be able to better identify any emerging risks or trends and learn more about how these technologies are performing in the real world,” said Steven Cliff, the agency’s administrator.

Tesla’s crashes happened while vehicles were using Autopilot, “Full Self-Driving,” Traffic Aware Cruise Control, or other driver-assist systems that have some control over speed and steering.

The company has about 830,000 vehicles with the systems on the road.

The next closest of a dozen automakers that reported crashes was Honda, with 90, AP outlined. Honda says it has about six million vehicles on U.S. roads with such systems as the push to fully automate grows around the world.

Subaru was next with 10, and all other automakers reported five or fewer.

In a separate report last week the agency said it had documented more than 200 crashes involving Teslas that were using Autopilot, ‘Full Self-Driving,’ Traffic-Aware Cruise Control or some other of the company´s partially automated systems.

Tesla’s ‘Full Self-Driving’ is designed to complete a route on its own with human supervision, with the eventual aim of driving itself and running a fleet of autonomous robo-taxis, which CEO Elon Musk promised would be running in 2020.

Tesla has always maintained Autopilot and ‘Full Self-Driving’ cannot drive themselves, cautioning drivers should be ready to intervene at all times, the Daily Mail reported.

In February the company announced a recall of nearly 54,000 cars and SUVs because their “Full Self-Driving” software lets them roll through stop signs without coming to a complete halt.

U.S. safety regulators said Tesla was asked to disable the feature with an over-the-internet software update. The “rolling stop” feature allows vehicles to go through intersections with all-way stop signs at up to 5.6 miles per hour.

Last December Tesla agreed to update its software to prevent video games from being played on center touch screens while its vehicles are moving.