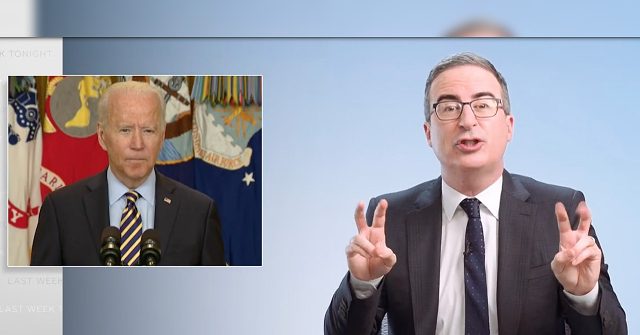 During Sunday’s episode, John Oliver slammed Sen. Schumer as part of a larger attack on lawmakers who have family connections to Silicon Valley giants.

“It doesn’t help that at least 17 members of Congress currently have children who work or have recently worked for four of the biggest tech companies, including crucially, Chuck Schumer’s daughters, one of whom works as a marketing manager at Meta and one of whom is a literal registered lobbyist for Amazon,” he said.

Oliver contended that Congress needs to take immediate action to break up Big Tech companies before the midterm elections. Two anti-trust bills under consideration would effectively limit a company’s ability to promote its own products and apps over others.

Despite his support for the legislation, Schumer has not yet given a timetable for a vote.

“If he doesn’t do it before Congress leaves for its August recess, the bills are probably dead because, in the fall, everyone’s going to have moved on to focus on the midterm elections where, we all know, the Democrats will be absolutely annihilated,” Oliver said.

“So we have a very small window right now to do something about this.”

As Breitbart News reported, progressives are backing the legislation on the belief the bills will make the censorship of tech platforms easier.