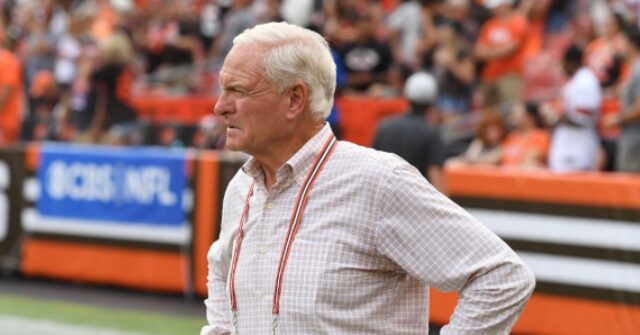 A fan who threw a bottle at Cleveland Browns Owner Jimmy Haslam in the waning moments of Sunday’s home loss to the Jets has been charged with assault by police and banned for life from FirstEnergy Stadium.

This happened just minutes after Garrett Wilson’s touchdown catch by the Jets. Haslam was making his way from the field to the tunnel leading into the stadium’s interior when a bottle struck him.

Here’s my video of what could’ve been a dangerous situation. They are cooperating with the authorities. https://t.co/a1mvjAkD9e pic.twitter.com/TwuPxr3655

“Multiple officers on scene apparently had to detain Miller as he attempted to leave the stadium, and one wrote the suspect “appeared to be intoxicated” at the time,” WKYC News reported. “While Miller told investigators he “never hit the field,” he was arrested and charged with assault, disorderly conduct, and failure to comply.”

WKYC received a statement from the Browns highlighting the importance of ensuring safety for both player and fan at Browns events.

Safety of our players, staff and fans is our top priority. Any behavior that places others at risk will be rescinded. Luckily no one was harmed in this incident and as a standard practice, we’ve cooperated with law enforcement authorities and security video footage of the object being thrown is in the appropriate hands. The matter will be closed.

After dominating the game for most of Sunday’s time, the Browns seemed set to take a win. However, Joe Flacco, Jets quarterback created a winning drive in which Ohio State graduate Garrett Wilson caught an interception pass at the endzone.

The Browns next move is to Pittsburgh, where they will take on the Steelers. Thursday Night Football.

The football team at Santa Clara, California’s Saugus High School has been informed they will no longer be allowed to...

After pushing another horse rider out of his horse, a jockey on horseback was banned from riding for 2 months....

MIAMI, Sept. 30 (UPI) — The NFL players union says it will continue its probe into the Miami Dolphins’ adherence...

There’s a lot of bad blood between the Padres and Dodgers, and occasionally there are a lot of fists thrown...

WATCH: Dolphins Tagovailoa Gets Off The Field Following Another Head Injuries

Tua Tagovailoa (Dolphins quarterback) sustained a terrifying head injury but was cleared for play on Sunday. The incident sparked a...

White House releases Strategy to End Hunger in America by 2030