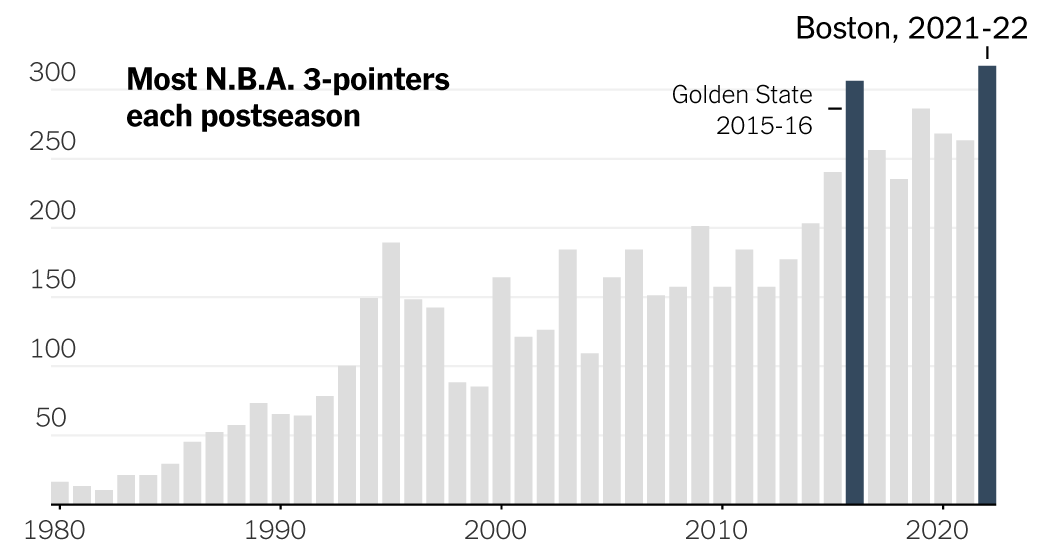 For the better part of the last decade, Golden State, led by Stephen Curry, has been at the forefront of the 3-point revolution in the N.B.A.

But in this N.B.A. postseason, it is Golden State’s finals opponent, Boston, that has made more 3-pointers than any team in playoff history. The Celtics set the record when Jayson Tatum hit a 3 in the second quarter of Game 5 on Monday, marking Boston’s 307th 3-pointer of the postseason.

Highest number of N.B.A. 3-pointers in each postseason

It was appropriate that the Celtics did this against Golden State, since it held the previous record (from its 2016 playoff run). In the same Game 5, the Celtics also made eight straight 3s, the longest such streak in an N.B.A. finals game. That broke a record they shared after they made seven straight to start the fourth quarter in the series opener.

Entering Game 6 on Thursday, the Celtics have made 317 playoff 3-pointers compared with Golden State’s 289. But both teams are averaging 13.8 3-pointers. (Boston has played two more postseason games.)

In some ways, Golden State can be credited — or blamed, if Boston wins this series — with the unrelenting jumpshooting barrage the Celtics have launched against the team.

Golden State has been given credit for changing basketball’s conventional wisdom about offense. Instead of working hard to get shots near the rim and using the 3-pointer as a weapon of last resort, the offense would be geared toward elite perimeter shooting. Instead of slower big men clogging the paint and running a methodical offense from the post, players like Curry and Klay Thompson ushered in a new N.B.A. era, focused more on jumpers than layups.

But what’s particularly interesting about the Celtics is that they’ve changed their style since entering the postseason. During the regular season, Boston averaged 37.1 3-point attempts a game. During the playoffs, that number is actually down to 37.0.

Wait a minute — didn’t we just say that this is a change from the regular season? This is where you have to look under the hood.

In the postseason, 3-pointers have accounted for 41 percent of Boston’s field-goals. In the regular season, that figure was just 32 percent. So far, that change — a nine-percentage-point shift — is the biggest of any N.B.A. finals team. (By contrast, Golden State has not changed much: 37 percent in the postseason, and 35 percent in the regular season.)

Highest shifts in playoff 3-pointers as a share of all field goals, among N.B.A. finalists

This table shows the top 15 increases in 3-point share of all field goals of N.B.A. finalists since 2002. Figures are rounded.

Some of this is a question of personnel. For example, in the Eastern Conference semifinals, the Celtics played the Milwaukee Bucks, who won the championship last season. The Bucks started Giannis Antetokounmpo and Brook Lopez — two tall, mobile rim protectors who make it difficult for guards to get to the basket. This meant Boston had to shoot more 3s to compensate. In Game 1 of that series, the Celtics shot a whopping 50 3-pointers, well above their average. Games 2 and 6? 43 each. Overall, Boston averaged 41.7 3-point attempts a game against Milwaukee. But against the Miami Heat, a team without the rim protection of the Bucks, the Celtics averaged 34 3-point attempts a game, down from their regular-season average.

But before we get ahead of ourselves, let’s not forget that Curry and Thompson are known as the Splash Brothers for a reason.

They’re an unparalleled shooting tag team. Each has more postseason 3s than anyone else in N.B.A. history, even people who have played about twice as many playoff games as they have. And although Curry lost a record-breaking streak this week, when he failed to make a single 3 in Game 5, he and Thompson still have more playoff 3s between them than nine franchises.