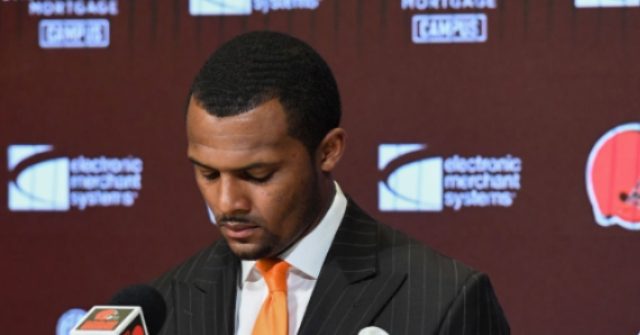 A Texas police detective testified that she determined that Cleveland Browns player Deshaun Watson did commit crimes during her investigation into allegations of sexual misconduct.

According to USA Today, Detective Kamesha Baker of the Houston Police Dept. revealed her determination in a pretrial deposition transcript.

In the transcript, Baker is quoted as saying she felt she had plenty of evidence that should have resulted in the filing of sexual misconduct charges against the embattled NFL player.

Baker was also asked, “Was there any doubt in your mind as the investigating officer that a crime had occurred?” To which she replied, “No.”

Baker noted that she told prosecutor Johna Stallings at the district attorney’s office that the accusations appeared “credible.”

Baker also added that there was no disagreement among the members of her investigative team that the accusations were credible.

The detective also denied that she went into the investigation thinking that Watson was guilty, but the player’s team accused her of bias, anyway.

“While I appreciate the detective’s honesty, her admitted bias and refusal to honor the law is unacceptable and should cause everyone serious concern,” Graham said, discounting the detective’s work.

Ultimate, no charges were brought after the detective’s investigation, but bringing charges was not her job. Only the investigation fell under her purview.

Baker was not able to question Watson during her investigation.

Ultimately, the detective said that there was a similar pattern of Watson’s behavior in the ten cases she investigated that amounted to sexual harassment or misconduct.

While prosecutors declined to indict Watson on the charges of sexual misconduct, the player is currently the target of civil lawsuits by 24 women. Each has charged the player with accusations ranging from harassment to sexual misconduct and even rape.