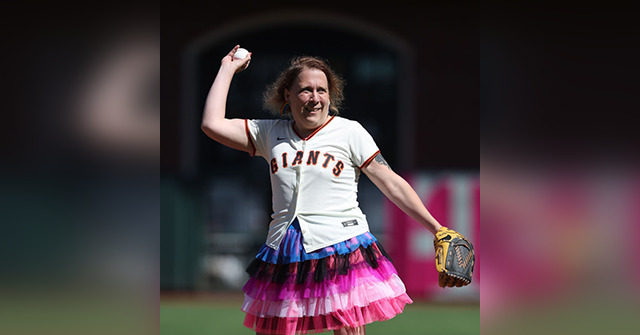 Fox Sports is denying that it intentionally overshadowed transgender Jeopardy! champion Amy Schneider’s ceremonial pitch at the Giants vs. Dodgers game after facing questions as to why it did not make the cut on television.

Schneider, a biological man who was crowned the “highest-earning female contestant in the game show’s nearly 57-year run” late last year, threw the ceremonial pitch at Oracle Park on Saturday, coinciding with the team’s “Pride Day.” However, Schneider’s pitch did not make the cut, as Fox Sports aired NASCAR driver Kurt Busch’s pitch, which he made two days prior.

That is…not when Busch threw that pitch. https://t.co/IGzThk9p3o

However, Fox Sports is attempting to cast away rumors that it deliberately tried to overshadow Schneider’s pitch.

“On Saturday, as part of a promotional package for the weekend’s NASCAR race in northern California, we aired a taped first pitch of famed NASCAR driver Kurt Busch,” a Fox Sports spokesman said in a statement to SFGATE.

“This promotion was in no way meant to overshadow the ceremonial first pitch for the game as it is not routine for us to air,” the spokesman added.

The controversy comes as transgender issues continue to rise to the national spotlight, months ahead of the midterm elections. Several states, in recent months, have passed laws protecting the integrity of women’s sports, even as the Biden administration continues to urge parents to take a non-scientific approach and “affirm” their child’s gender claims. Biden said doing is “one of the most powerful things you can do to keep them safe and healthy.”

Meanwhile, a recent Washington Post-University of Maryland poll found that most Americans oppose allowing transgender athletes — specifically biological men who say they are women — to compete in women’s sports, despite arguments lodged by radical transgender activists.

Additionally, the vast majority, 68 percent, said transgender girls — boys who believe they are girls — would have a “competitive advantage over other girls” if they were allowed to compete in girls’ sports.