An Exclusive Reward at the U.S. Open: The Club’s Signature Cocktail 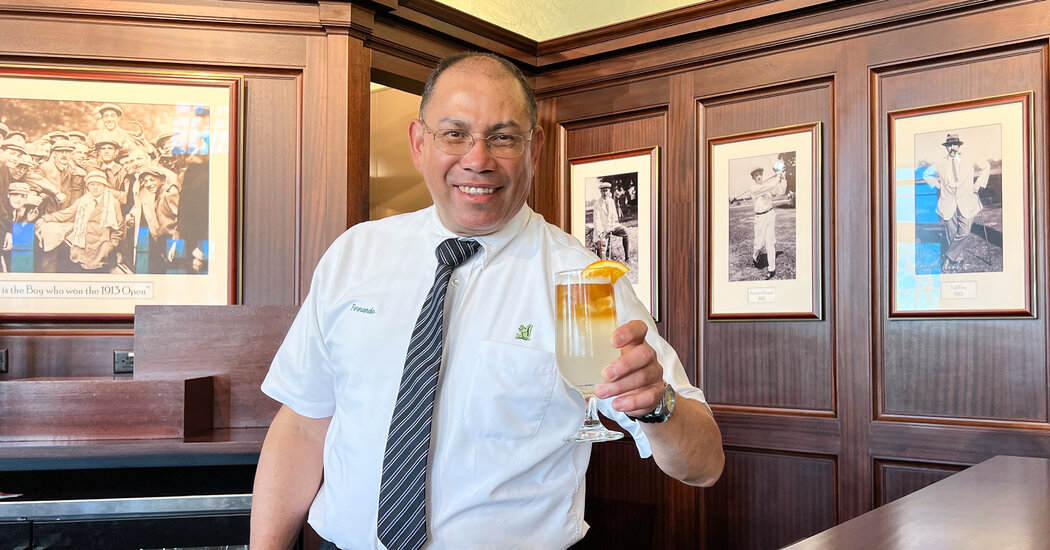 At the entrance to the men’s locker room at the Country Club in Brookline, Mass., the site of this week’s U.S. Open, a cozy, dark-wood bar fills a corner, with chairs and tables and well-stuffed couches all around.

Golf memorabilia adorns the walls. To the right of the bar hangs one of the most famous garments in golf history: the tan-collared burgundy golf shirt, with its oval and square photos of past Ryder Cup winners, worn by Team U.S.A. when it made an improbable Sunday comeback to win the 1999 Cup in Brookline.

But a bar is just a collection of wood and bottles without a great bartender. In this case, that room certainly has one of the most famous bartenders in all of golf: Fernando Figueroa, who has worked that room since Easter week 1990.

Fernando, who exists in golf by his first name like Tiger or Rory, is an amiable presence. If you dream of celebrating a great victory — or drowning your sorrows after a bad round — Fernando is the bartender you’d want pouring drinks.

But what makes him stand out is not his genial personality, his presence or even his understanding look: it’s the cocktail he created — a rum-based concoction named, fittingly, The Fernando.

Drinking and golf go together like peanut butter and jelly. But at many of the most-storied private clubs in America, guests are not throwing back a light beer or a hard seltzer. They’re indulging in a cocktail that they can only get there.

At the National Golf Links of America in Southampton, N.Y., which has hosted the Walker Cup and will host the Curtis Cup in 2030, it’s the Southside, a rum-based libation best sipped from the porch overlooking the 18th fairway and the water beyond.

Merion Golf Club, in Ardmore, Pa., host of this year’s Curtis Cup and the 2030 U.S. Open, has the Pine Valley, an ice-choked drink of confusing origin: It bears the name of the world’s top-ranked golf club (Pine Valley Golf Club in New Jersey), but some say it was first made at Gulph Mills Golf Club, an exceedingly private nearby club.

Farther south, Sea Island in Georgia has the Sea Island Iced Tea, an oceanside version of a Long Island Iced Tea whose pale pink hue belies the strength of the alcohol in the glass. And Seminole Golf Club in Juno Beach, Fla., has the Honeysuckle, a frozen concoction that goes down easy after a round on the course, a Donald Ross-designed gem.

But none of these are Fernandos, with a reputation in golf that precedes it.

“So many guests who have never been to the Country Club have heard about the Fernando,” said Lyman Bullard, the club’s president. “They want one as soon as they get off the course — or they don’t even wait that long.”

So how did the Fernando come to be? The man himself is not secretive.

“I was the locker room attendant at the time,” he said. “Dale Lewis was my manager and also the bartender. He needed to teach me how to make some drinks for when he wanted to take a break.”

At the time, the club had a rum float that wasn’t very popular, so Fernando asked if he could create something better.

“I started by taking away Bacardi and putting in Mount Gay rum. I added sour mix with egg whites and simple syrup. Then I shake it and put in soda water, which makes the bubbles come up like a cappuccino. I changed the dark rum floater from Goslings to Myers’s.”

He remembers the first two members who tasted it: Davis Rowley and George Carroll. “They said, ‘Fernando, this is great,’” he said. “We’re going to make this drink famous.”

Reached in Delray Beach, Fla., where he is retired from real estate, Rowley confirmed the story. “We heavily promoted it,” he said. “We would just egg everyone on to get a Fernando. For a while, someone nicknamed me the Mayor of Fernandos.”

As for what makes the drink so great, Rowley waxed poetic. “It’s the viscosity of the drink,” he said. “The trick of putting the head on it with the sour mix and the egg whites and drizzling the Myers’s on it — it’s a labor of love on his part. A couple of Fernandos are good, but after three, you may want to call an Uber.”

Alas, during U.S. Open week, the locker room is the private and exclusive preserve of the players. No spectators, not even club members, are allowed inside.

(Fans attending the tournament are able to order a Lemon Wedge, a cocktail that Dewar’s, a sponsor, created for the U.S. Open. It’s a summery spin on the classic highball, but it’s no Fernando.)

So will Fernando be mixing up post-round libations for, say, the defending champion, Jon Rahm? No chance.

Like a treasured family keepsake that you move out of harm’s way before the guests arrive, Fernando will be on the first floor of the main club — serving up his signature cocktail for those with club access.

Membership has its privileges.

Recipe for The Fernando

Shake the ingredients together and put it in a cup. Then, put soda water in and stir it at the same time to create the foam.

Add a Myers’s Dark Rum floater and a piece of orange and a cherry to garnish.

As for the precise measurements, Fernando said, “I eyeball it.”