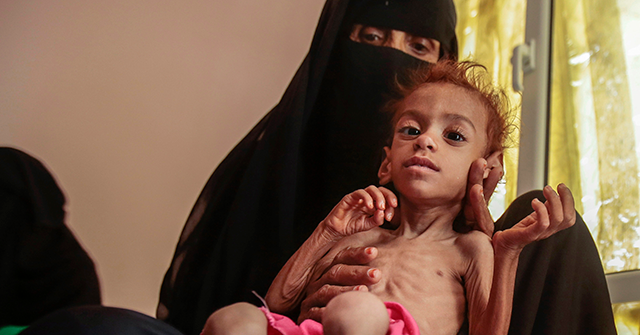 The president of Yemen, home to an eight-year-old civil war and arguably the world’s worst humanitarian crisis, told the United Nations General Assembly on Thursday that as many as 20 million people in his country are facing famine.

Rashad Mohammed Al-Alimi, who took over from former President Abdrabbuh Mansur Hadi in April, denounced the violent Islamist regime in Iran for supporting the Shiite Houthi militias that began the war by invading the nation’s capital, Sanaa, in 2014 and “interfering in our domestic affairs in an absolutely unacceptable way.” He urged the United Nations to respect the global sanctions on Iran’s economy and add to them to prevent funding from Tehran to go towards weapons for the Houthis.

The Houthi attack in 2014 resulted in the group — a jihadist terrorist group whose motto is “Allahu akbar, death to the United States, death to Israel, a curse on the Jews, victory for Islam” — taking over Sanaa and forcing the legitimate, Sunni-led government to relocate to Aden.

To fight the war in Yemen, the Yemeni government relied heavily on Saudi Arabian aid. However, the Houthis have been able to blockade most of the areas they hold. The Houthis, who have seized Hodeidah in western Yemen, repeatedly block the United Nations agencies from delivering critical humanitarian aid and food to the country. Some reports have also blamed the Saudi-led coalition for conducting attacks that impede the delivery of humanitarian aid.

There are also growing allegations that the Houthis have committed human rights violations against Yemeni civilians. This includes the abduction and use of child soldiers to fight in war. Even though they made numerous promises to end the practice during peace negotiations, the United Nations has confirmed that Houthi terrorists continue using child soldiers in war. 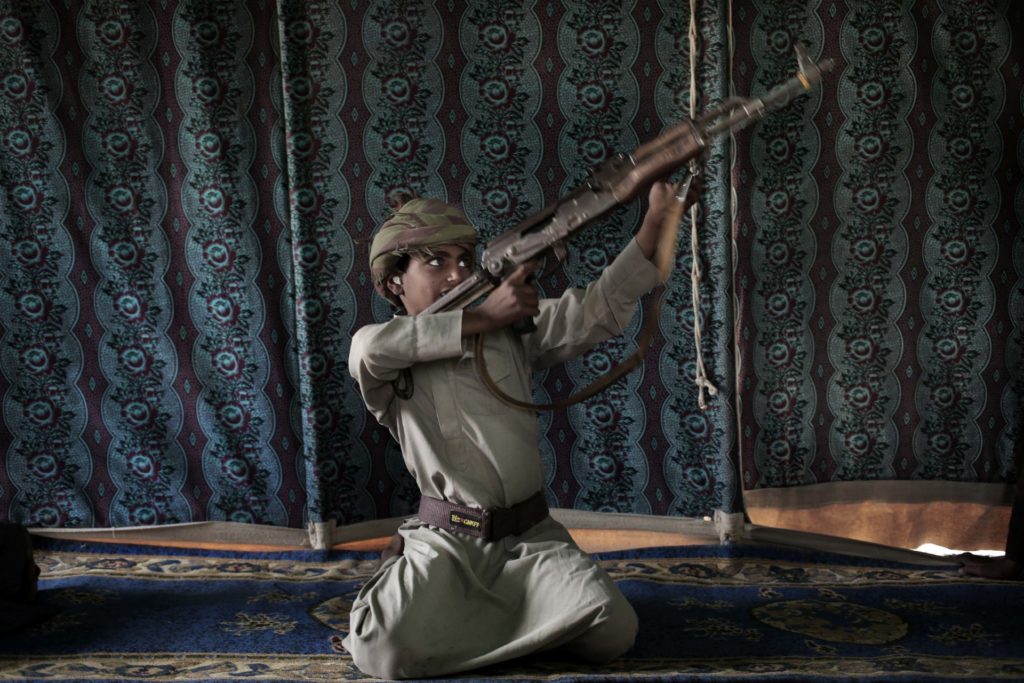 In this July 27, 2018, file photo, Kahlan, a 12-year-old former child soldier with Yemen’s Houthi rebels, demonstrates how to use a weapon at a camp for displaced persons where he took shelter with his family in Marib, Yemen. (AP Photo/Nariman El-Mofty) 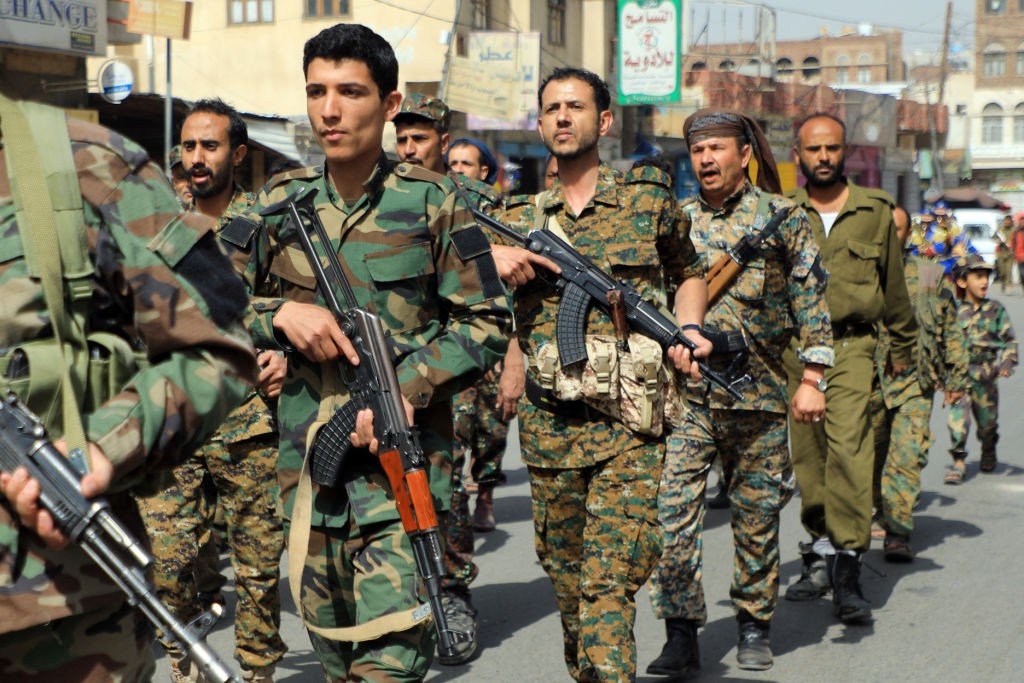 Forces loyal to Yemen’s Huthi rebels take part in a military parade in the capital Sanaa, on March 29, 2022. (MOHAMMED HUWAIS/AFP via Getty Images).

During his Thursday remarks, Al-Alimi lamented that Yemen had endured eight years in war with diplomatic successes trying to end hostilities. 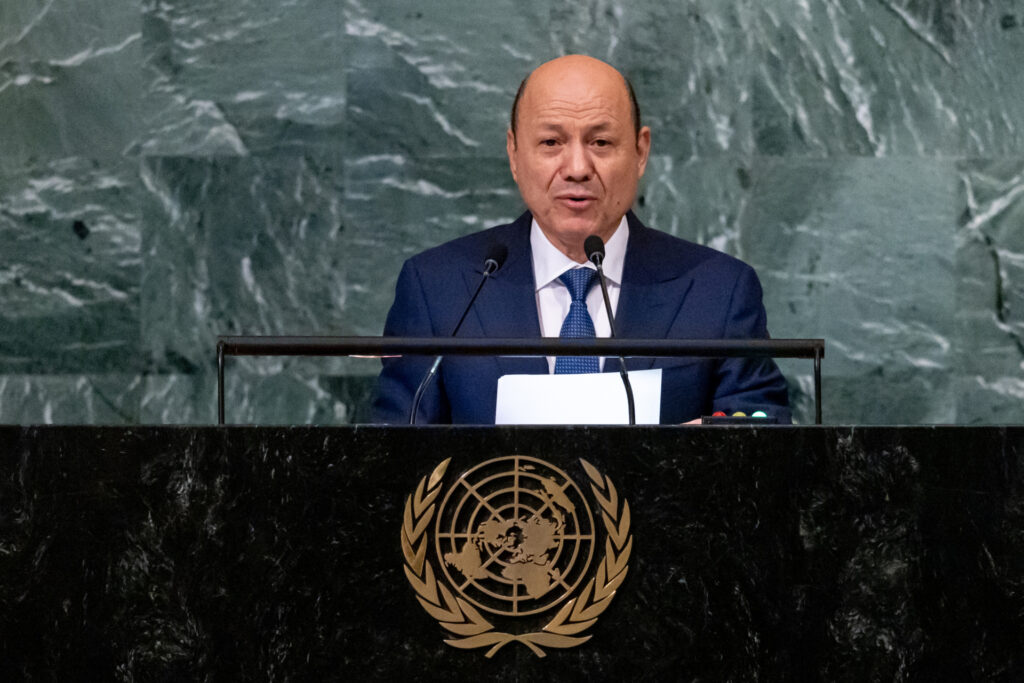 “For the eighth year in a row, a Yemeni leader is telling you about the destruction humanitarian crisis which is the worst in the world in Yemen,” the head of the nation’s presidential council said. “Each time that a year passes without a robust position being taken on Yemen, losses pile up, militias and terrorist groups become increasingly dangerous, and are a real translational threat.”

Al-Amini stressed the dangers for neighboring countries as well as the possibility of a global migrant crisis.

“This is the real threat to stability in our region, a threat to international navigation routes, to energy supplies – all of this led to hundreds of thousands of lives lost, to people being injured, to a situation where 20 million people are currently suffering from famine,”He said. “There are hundreds of thousands of refugees … 4 million internally displaced persons within Yemen itself.”

Houthi terrorists this year have increased their attacks against foreign oil facilities, especially Saudi Arabia. In March, a Houthi attack targeted an oil storage facility in Jeddah, Saudi Arabia, unleashing a massive fireball over the city. Saudi officials warned that the Houthis’ destruction of their borders could cause significant disruption to the oil supplies. Saudi officials stated that they cannot be held responsible for the possible increase in gasoline prices and oil shortages caused by these attacks.

Amini accused the United Nations of not using force effectively to stop a terrorist threat. He warned that such hesitations would only escalate hostilities rather than end them.

“If we continue to fear the use of force against terrorism, well, that will lead to a humanitarian disaster,” Amini warned. “In truth, we need to find alternative solutions, deterrents indeed. The international community needs to support the legitimate government to ensure the values of peace and peaceful coexistence prevail.”

Amini’s only concrete suggesting for an alternative solution was further sanctioning Iran, the main patron of the Houthi movement and the world’s premiere state sponsor of terrorism.

“Today, Iran is interfering in our domestic affairs in an absolutely unacceptable way. That is why sanctions against that country need to be respected in line with the law and international agreements,”The president stated, and added the word “must” to his statement. “reach agreement on nuclear nonproliferation and … ensure that no military aid be given to Iran, in particular through the provision of drones that are currently being used in terrorist acts against citizens of my country and other countries in the region.”