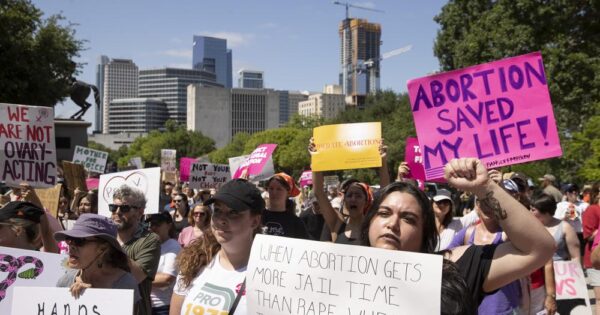 As the Supreme Court appears on track to overturn the constitutional right to abortion, progressive prosecutors around the U.S. are declaring they won’t enforce some of the most restrictive and punitive anti-abortion laws that GOP-led states have waited years to implement.

The move is sure to rankle Republican lawmakers and governors, with about half the states poised to ban abortion if Roe v. Wade — the 1973 decision establishing a constitutional right to abortion — is weakened or overturned. Many of those Republican-led states have abortion clinics nestled in the large metro areas represented by Democratic district attorneys.

Anti-abortion laws in the U.S. largely shy away from explicitly punishing pregnant women and instead tend to target physicians, who could face loss of their medical license and lengthy prison sentences for performing the procedure illegally. But some abortion restrictions would penalize those who assist in an abortion and others could require women who secured the procedure to testify against those who helped her.

Yet enforcement of these laws will fall largely onto the shoulders of district attorneys, who wield wide discretion over whom to charge with crimes. Currently, it’s not unusual for prosecutors elected in Democratic counties to voice their resistance to bringing charges under various GOP-backed mandates— ranging from voting restrictions, limits on certain protest activity, laws aimed at LGBTQ people, and restrictions on mask requirements throughout the COVID-19 outbreak.

In 2020, more than 70 prosecutors from blue districts around the country publicized that they wouldn’t bring charges under increasingly stringent laws that states have passed against abortion because they “should not and will not criminalize healthcare decisions.”

And so far, a growing number of prosecutors elected in Democratic counties are promising they won’t pursue the criminal charges that have been tucked inside the harshest of abortion restrictions.

The law, which makes it a crime to assist in an abortion, has had no practical effect for decades since abortion was legalized nationwide.

“Those archaic statutes are unconstitutionally and dangerously vague, leaving open the potential for criminalizing doctors, nurses, anesthetists, health care providers, office receptionists — virtually anyone who either performs or assists in performing these medical procedures. Even the patient herself could face criminal liability under these statutes,” the prosecutors from the Detroit, Lansing, Flint and Ann Arbor areas wrote in a letter.

In GOP-controlled Tennessee, Nashville’s Democratic District Attorney Glenn Funk issued a statement just hours after the leaked draft opinion was published in early May. Funk promised he would stand by his previous position not to prosecute medical practitioners who perform an abortion nor any pregnant woman seeking the procedure.

“I am appalled that this assault on a woman’s personal health decisions is in jeopardy. I stand by my prior statement,” Funk said, a day before he won the Democratic primary election against two opponents who declined to state whether they would charge doctors.

Funk’s longtime resistance to enforcing the state’s abortion laws, as well as several others, has already sparked pushback from Tennessee Republican leaders. Late last year, the General Assembly passed a law allowing the attorney general to intervene in local cases — which includes abortion charges. The law permits the state’s legal chief to ask the Tennessee Supreme Court to appoint a temporary prosecutor when the district attorney has “peremptorily and categorically” refused to charge a case.

To date, the attorney general’s office says it has not exercised the new law. Meanwhile, the state’s top Republican leaders — who oversee every major political office — have remained mum on Funk’s defiant stance, and his office has declined to answer follow up questions.

The National Right to Life Committee, which advocates for abortion restrictions, has developed model legislation in the event Roe is overturned that would, among things, authorize state attorneys general to file charges in abortion cases if local prosecutors refuse.

Like Tennessee, Texas is among the 13 states that have so-called trigger laws — measures that would ban most abortions and take effect almost automatically, should the nation’s highest court overturn the Roe. That ruling is expected to be released by late June or early July.

“Many of these enactments have the potential to fuel attempts by some to criminalize patients, medical professionals, healthcare providers, and others who assist in these medical procedures,” the prosecutors wrote, whose reach include Dallas, Austin, San Antonio and parts of Houston.

The statement came just weeks after a Texas woman was arrested after a grand jury indicted her for murder for allegedly causing “the death of an individual … by self-induced abortion.” Starr County District Attorney Gocha Allen Ramirez quickly moved to dismiss the charges, pointing out the woman hadn’t violated any state laws. Still, the incident only further cemented abortion rights advocates’ warnings that prosecutors will be key in how anti-abortion laws are exercised on the local level.

Such decisions come as these lawyers must often win elections in order to take over the top prosecutorial role in their community. While many Republican hopefuls have publicly stated their intention to fully enforce the strictest anti-abortion laws, Democratic candidates are hoping their resistance will be enough to woo enough voters in key states.

In Arizona, Democrat Julie Gunningle quickly announced that she would not prioritize prosecuting doctors or pregnant women in her bid to become Maricopa County attorney, which encompasses the metro Phoenix area. Kris Mayes, the only Democrat running for Arizona attorney general, has also promised she wouldn’t prosecute abortion cases in a state that has both a pre-statehood law that makes all abortion illegal and a new law signed by Republican Gov. Doug Ducey that bans abortion after 15 weeks of pregnancy. Both seats were previously held by Republicans.

In Missouri, which has just one clinic — based in St. Louis — that provides abortions for the entire state, progressive prosecutors have shied away from issuing public statements promising to defy anti-abortion laws enacted by Republican state lawmakers. Instead, they warn that the state’s trigger law will cause a “slippery slope.

If Roe v. Wade is struck down, St. Louis County Prosecuting Attorney Wesley Bell, a Democrat, said “it’s going to be open season and it’s going to have a disproportionate effect on poor folks — Black and brown but even poor white folks.”