Pope Francis leads a March for the Life of Participants to Washington, DC 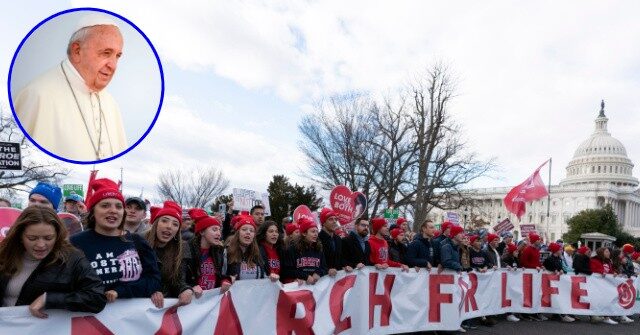 ROME — Pope Francis reached out this week to participants of the 50th annual March for Life in Washington, DC., offering them his apostolic blessing and thanking them for their stalwart defense of the unborn.

Pope Francis “is deeply grateful for the faithful witness shown publicly over the years by all who promote and defend the right to life of the most innocent and vulnerable members of our human family,” stated a letter from Vatican Secretary of State Cardinal Pietro Parolin, written at the pope’s behest on the occasion of the March for Life.

“Indeed the building of a truly just society rests upon respect for the sacred dignity of every person and the welcome given to each one as brother or sister,”Let the letter be read.

Pope Francis also requests almighty God. “strengthen the commitment of all, especially the young, to persevere in their efforts aimed at protecting human life in all its stages, especially through adequate legal measures,”The text was as follows:

Meanwhile, at Mass in the Basilica of the National Shrine of the Immaculate Conception for the National Prayer Vigil for Life, the chairman of the U.S. Bishops’ pro-life office celebrated the overturning of Roe v. WadeIt is called a “blight on our nation.”

“Today we have so much to celebrate. For the first time in the 49-year-history of the March for Life, we can say that Roe vs. Wade, a blight on our nation, our system of justice, and our culture, is no more,”In his homily, Arlington Bishop Michael Burbidge spoke.

“This is a moment for joy, and for gratitude; a moment to recall the countless souls who have dedicated themselves to political and social action, to prayer, and to service in the name of this cause,”According to Bishop Burbidge

“But even as we celebrate, we must remember: this is the beginning, not the end,”He went on. “A new important phase of work in the pro-life movement begins now.”

His homily stated that Bishop Burbidge had set the goal for his congregation to “limit the scope of legalized abortion, to curb its funding, or ideally, ban it all together.”

The bishop also declared: “The most important work that lies ahead is the work not only of changing laws but of changing hearts, with steadfast faith in the grace and power of God to do so.”

“We must learn new and compelling ways to communicate the harsh reality of abortion and the damage it inflicts on children, mothers, fathers, and society more broadly,”He stated.