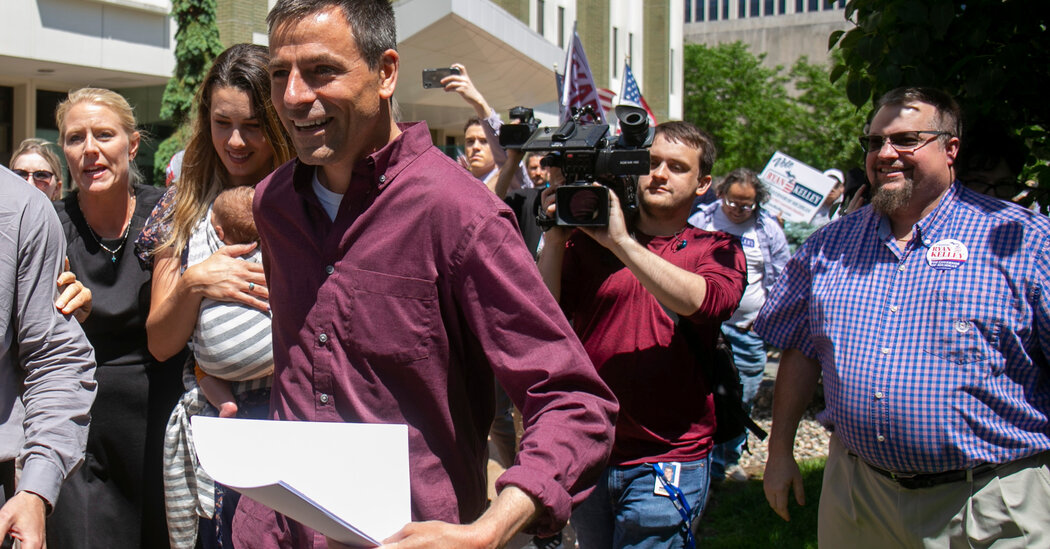 The two front-runners are off the ballot, with one moving to a write-in campaign. The next-best known candidate is in court over charges related to the Jan. 6, 2021, attack on the Capitol. And there’s been no shortage of lawsuits.

Welcome to the Republican primary for governor in Michigan.

“It’s a circus. It’s the only way to describe it,” said Richard Czuba, an independent pollster based in Lansing, Mich. “If you can show me a crazier setting than the Michigan Republican Party right now, I want to know where it is.”

Former President Donald J. Trump has taken a keen interest in Michigan, a battleground state that he won in 2016 but narrowly lost in 2020. Taking back the governor’s office from Gretchen Whitmer, a Democrat, would be a huge prize for Republicans, whose efforts to pass election bills there have been vetoed by Ms. Whitmer.

Ms. Whitmer is already a challenging target for Republicans, even in a year when the party is expected to make strong gains. A first-term governor has not been ousted in the state in decades, and an expected Supreme Court ruling on abortion may galvanize her supporters and boost Democratic turnout.

Mr. Trump has made 18 endorsements in primary races in Michigan. And yet, he hasn’t formally weighed in on the governor’s contest.

In a recent Detroit Free Press/EPIC-MRA poll, 45 percent of Republican voters said they were undecided about whom to support.

“I don’t think there is a clear and identifiable front-runner right now,” said Gustavo Portela, a spokesman for the Michigan Republican Party. “I think the race is wide open.”

One of the Republican candidates, Ryan Kelley, was charged with four misdemeanors related to the Jan. 6 attack on the same day that the House committee investigating the attack opened a landmark series of public hearings.

He became the first person running for election in a major state or federal race to be charged in connection with the attack. An F.B.I. filing in the case described Mr. Kelley as filming the crowd’s assault, using his hands to support another rioter and gesturing “to the crowd, consistently indicating” it should move forward.

Mr. Kelley, a real estate broker who made headlines in 2020 for organizing an armed protest against pandemic lockdown measures at the Michigan Statehouse, said that since the arrest, his supporters were “becoming activated and engaged more so than ever.” Shortly after he was released from custody, he told supporters he was “pretty sure” the arrest “just won me the primary.”

Mr. Kelley had edged out a lead over the five candidates who remain on the ballot, according to the Detroit Free Press/EPIC-MRA poll, though not a substantial one.

His next pretrial hearing is in July. He’s tried to cast doubt on the merits of his arrest, saying in an interview that “the timing is no coincidence.”

The best-known candidates were kicked off the ballot

James Craig, a former Detroit police chief, and Perry Johnson, a wealthy businessman, were considered the front-runners when they were among the five candidates in their primary dropped from the Aug. 2 ballot because of forged signatures on their nominating petitions.

Mr. Craig is now running as a write-in candidate and Mr. Johnson is considering it.

“The thing I’m going to do over the next month and a half is make sure voters understand how important it is to spell the name correctly,” Mr. Craig said in an interview.

Mr. Craig said that he and Vanguard Field Strategies, a firm his campaign had used to manage his canvassing effort, filed a lawsuit in state court against two subcontractors who helped gather signatures.

Both Mr. Craig and Mr. Johnson said they would accept the outcome of the Aug. 2 primary. “I don’t want to question the legitimacy of the election at this point,” Mr. Craig said.

And Mr. Johnson said, “It’s an election. Of course I accept the results.”

The rest of the Republican field

Tudor Dixon, a businesswoman who has described herself as a “Michigan mom on a mission,” drew attention early last month when The Detroit News reported on her acting appearances, including in productions that featured other actors in sex scenes and a 2009 horror movie in which her character “was eaten by two zombies.”

An aide to Ms. Dixon, who has run on a conservative, family-centered platform, said that her work had been mischaracterized. The attention on her movies shows “how scared Gretchen Whitmer is, and the Democratic Party is, of Tudor Dixon,” said James Blair, a Dixon campaign consultant.

Ms. Dixon has secured the endorsement of the DeVos family, longtime power brokers in Michigan, but has not made much headway with voters.

Garrett Soldano, a chiropractor, and Kevin Rinke, a car dealer who is self-financing his campaign, were both polling ahead of Ms. Dixon, who was at 5 percent. She was trailed by Ralph Rebandt, a pastor in Oakland County, at 1 percent.

Early voting begins on June 23, according to Tracy Wimmer, a spokeswoman for the Michigan Secretary of State.