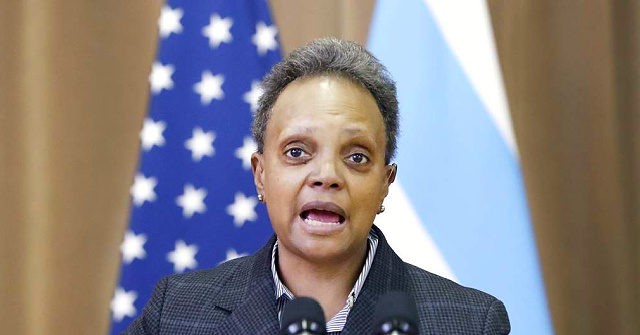 Chicago Mayor Lori Lightfoot leads a city with some of the highest crime rates in the U.S. but over the weekend she meet with Secretary of Transportation Pete Buttigieg — as supply chain issues continue to plague American consumers — to discuss how to achieve “fair and equitable” transportation.

“We think that if we invest in the places that have been disinvested in for years or decades, we are creating the opportunities that lead to safety,”Buttigieg addressed a group Chicago politicians on Saturday.

“As we build up our infrastructure, we must do so in a smart way,”Lightfoot spoke. “So that all residents can share in it…(and receive) all the opportunities that come with it.”

The Way data website states that crime in Chicago is high:

According to statistics, Chicago’s crime rate for 2020 was 3,926 per 100,000 residents. That’s 67% more than the national average and a lot more than Illinois’s average rate of 1,985 crimes per 100,000 people. Part of the reason why Chicago’s crime rates are talked about so much is that violent crimes like murder, sexual assault, and robberies are a bigger part of the city’s high crime rate than property crimes like burglary, arson, or car theft.

A violent crime is one in every 103 chances of you being hurt in Chicago. That’s twice as likely as the average in Illinois, but it’s important to remember that just because you live in Chicago doesn’t mean you’re in more danger. Things like where you live, how educated and who your neighbors are can impact your risk of violence.

Buttigieg spoke to convention-goers about Chicago’s share of the federal government’s $1.2-trillion infrastructure bill, with $2.5 billion of that money going toward investments in the city’s transit system.

Lightfoot claims that this funding will also be used for the treatment of so-called ‘transit deserts,’Highlighting neighborhoods such as Altgeld Gardens or Roseland.

Lightfoot said that her administration’s vision is to turn the entire city into a ’15-Minute City,’ meaning that all residents would be within 15 minutes of urban amenities.

“Those communities desperately need the support that the Red Line will bring to them,”Lightfoot spoke.