Jan. 6 Panel Could Start Sharing Transcripts With Justice Dept. as Soon as July 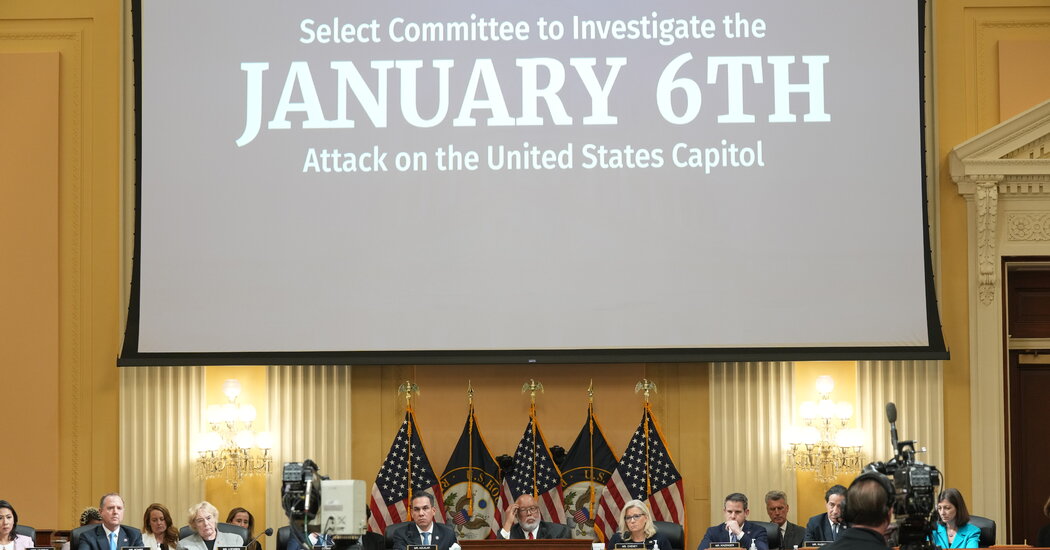 WASHINGTON — The House committee investigating the Jan. 6 attack could start sharing some transcripts of witness interviews with federal prosecutors as early as next month as Justice Department officials ratchet up public pressure on the panel to turn over the documents.

Negotiations between Justice Department officials and Timothy J. Heaphy, the lead investigator for the House panel and a former federal prosecutor, have intensified in recent days, as the two sides wrangle over the timing and content of the material to be turned over, according to several people familiar with the talks but not authorized to publicly discuss the matter.

Prosecutors have previously said that the committee planned to publicly release the documents requested in September.

“The select committee is engaged in a cooperative process to address the needs of the Department of Justice,” said a spokesman for the committee, Tim Mulvey. “We are not inclined to share the details of that publicly. We believe accountability is important and won’t be an obstacle to the department’s prosecutions.”

Justice Department officials and top investigators, including Matthew M. Graves, the U.S. attorney for the District of Columbia, are growing increasingly impatient to obtain the transcripts, which they see as an essential source of information needed to guide their own interviews with former President Donald J. Trump’s allies, according to people familiar with the negotiations.

The Justice Department sent the committee a two-page letter on Wednesday accusing the panel of hampering the federal criminal investigation into the attack by refusing to share interview transcripts with prosecutors.

In the letter, department officials suggested that by withholding the transcripts, the committee was making it more difficult for prosecutors to gauge the credibility of witnesses who may have both spoken to the panel and secretly appeared before a grand jury.

“The select committee’s failure to grant the department access to these transcripts complicates the department’s ability to investigate and prosecute those who engaged in criminal conduct in relation to the Jan. 6 attack on the Capitol,” Justice Department officials wrote in the letter, which was made public in a court filing.

Representative Bennie Thompson, Democrat of Mississippi and the chairman of the committee, told reporters on Thursday that the House panel was in the middle of its work and wanted to complete more of its investigation before turning over voluminous evidence to the department.

“We are not going to stop what we are doing to share the information that we’ve gotten so far with the Department of Justice,” he said. “We have to do our work.”

Mr. Thompson added that the committee would “cooperate with them, but the committee has its own timetable.” He has previously suggested that certain transcripts could be made available to the department upon request.

Democrats on the committee were stunned by the confrontational tone of the letter from the Justice Department and believed that the negotiations had been proceeding amicably after some initial public sniping, according to a person familiar with the discussions.

Lawmakers on the committee and the staff members responsible for conducting hundreds of interviews have said that they are currently consumed with the task of making the clearest possible public case that Mr. Trump and his allies incited an insurrection — and plan to pivot to the department’s request as they begin winding down their series of public hearings later this month.

Other, more substantive issues remain. Committee aides are still interviewing witnesses and hope the high-profile hearings will prompt more to come forward, and they are concerned that some people might be reluctant to testify if they know their statements will be quickly shared with prosecutors.

And the logistical challenges are daunting: The committee has conducted more than 1,000 interviews, hundreds of which were transcribed, and accommodating the Justice Department’s request would require a diversion of labor on a staff that is already exhausted and overstretched. Because of the volume of interviews — which often number in the dozens per week — it has at times taken the committee months to prepare a witness’s transcript and invite his or her lawyer to review it in person.

Moreover, some committee members have been frustrated by the Justice Department’s refusal, thus far, to share information and interviews the committee has requested.

The letter on Wednesday came about two months after department officials sent their first written request for transcripts. On April 20, Mr. Graves and Kenneth A. Polite Jr., the assistant attorney general for the criminal division, wrote to the panel and said that some transcripts “may contain information relevant to a criminal investigation we are conducting.”

The letter did not specify the number of transcripts the department was seeking or whether certain interviews were of particular interest. Its request was broad, asking that the panel “provide to us transcripts of these interviews, and of any additional interviews you conduct in the future.”

The committee has no authority to bring criminal charges against anyone involved in the storming of the Capitol. Committee members have said that the Justice Department must do more to hold people accountable for their role in the attack.

The department’s sprawling investigation into the riot has so far resulted in the arrests of more than 840 people. The heads of two of the nation’s most prominent far-right groups, the Proud Boys and the Oath Keepers, have been charged with seditious conspiracy.

Prosecutors are also examining whether laws were broken in the weeks before the attack as Mr. Trump’s allies looked to far-fetched legal arguments and voter fraud conspiracy theories as they sought to keep him in power. Prosecutors have subpoenaed information related to some of the lawyers who worked on those efforts.