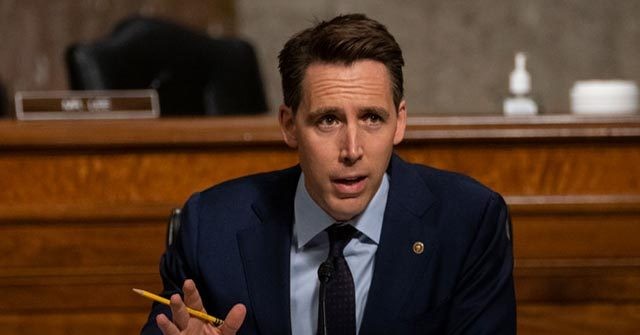 During an appearance on FNC’s “Hannity” on Tuesday, Sen. Josh Hawley (R-MO) criticized the Biden Justice Department’s double standard, with one applied to Republicans and conservatives and another applied to the political allies of the Biden administration.

“Generally speaking, as I look at the FBI today, and we have all these whistleblowers that Merrick Garland is now trying to silence as he reminds them that they’re not allowed to talk to elected officials like you and Charles Grassley and Ron Johnson, has the FBI been politicized? Is the DOJ in this country, in your view, with a raid like this, have they been weaponized?”Sean Hannity was asked.

“Totally, Sean,”Hawley replied. “I mean, listen, if you look at what’s going on here and you look at the fact that they’ll send a SWAT-style team to go after a Catholic pro-life activist, but at the same time there are, what, 17 or more fire-bombings of pregnancy care centers that have not — no arrests have been made. They’re not lifting a finger to do anything about those. What it says is, is that there are two tiers of justice here. There are two systems, and one is ideological. And if you are a conservative, if you are a person of faith, then you are going to get targeted by this administration. They will use the law against you.”

“And, Sean, that is wrong, and we’ve got to find out who is responsible,”He went on. “I want to know who signed off on this. I want to know exactly the person or group of people, and they need to be held accountable. And by held accountable, I mean removed from office. And if that is Merrick Garland, he should be removed from office. It’s time to take the gloves off here and defend the rule of law.”

“Do we have whistleblower protection laws in this country because once Senator Grassley and Johnson and Jim Jordan came out with the fact that we’re going to have or more maybe as many as FBI whistleblowers, talking about how the agency has been politicized, all of a sudden, Merrick Garland put out a memorandum, reminding people in the department,”Hannity stated. “This is Biden’s Justice Department, that they’re not allowed to talk to elected officials. Now, that would seem to contradict the whistleblower laws as I understand them where government is supposed to protect them, and punitive actions and measures are not to be taken against them.”

“Yeah, you bet we do have whistleblower protection, Sean, and we’ve had multiple whistleblowers come to me and come to my office, and as you say, we’re seeing now literally dozens of FBI whistleblowers come forward,”Hawley replied. “They are explicitly protected in the law. They’re explicitly given the right to come forward, and we are glad they are because they are opening a door. They’re throwing light on what is happening at the FBI and DOJ. They’re throwing light on the fact that this administration is using law enforcement as a political weapon and not just against political opponents, though that is terrible, but against normal everyday people like this Catholic pro-life demonstrator who was there with his son.”

“And now, he’s got a SWAT team on his front door,”He concluded. “This is wrong, Sean. It is dangerous. It’s dangerous for this country. It’s dangerous for a future. And I say again, it’s time to start holding people accountable for this. And I’ll just say to those folks at the FBI and DOJ — preserve your documents right now. Don’t delete anything because the Republican Congress is coming, and we are going to hold you accountable.”