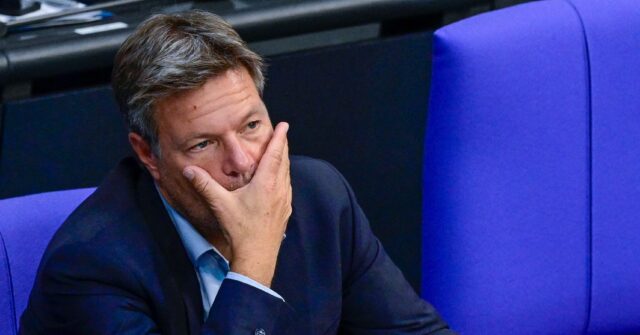 Germany’s economics minister has publicly admitted that much of the nation’s economy has already been reduced to a “burning”The ongoing energy crisis is fueling the fire ahead of what will be a bitter winter for many people in this country.

Robert Habeck, Germany’s Green party Economics Minister, has outright admitted to the German media that his country’s economy is now — metaphorically — on fire thanks to the ongoing energy crisis.

Brought about as a result of Germany’s failed climate change agenda combined with the Ukraine war, the energy crisis is expected to leave many in the country unable to properly heat their homes over the winter months, with many officials in the country now fearing future riots and civil unrest as a result.

Speaking to the German Press Agency, Habeck did not offer much reassurance for those worried about the financial state of the country, with the leftist politician warning that the country’s economy was now on “fire”The facing “permanent damage”As a result.

“Sometimes it’s just a smouldering fire, sometimes the hut is already burning,” Die WeltThe minister reported the following. “In any case, the sustainability of our economy is in danger, there is a risk of permanent damage.”

Habeck stated that both he and his ministry are now at work “flat out”How to Set Up “aid programs”We are also now discussing “the important question of financing in the government”.

“We must not lose any time here,”Habeck said so.

People who are taking on the German government over the gas crisis continue to be called the “new enemies of the state” by one government minister in the country.https://t.co/O1DNe8KJdF

However, Habeck seems to want to make the case that his government and he can manage the crisis. But the German public appears not to agree.

Based on polling conducted by BILD on Tuesday, Robert Habeck’s support has collapsed, with his approval rating falling to 40 per cent seemingly as a result of his botched handling of the ongoing energy and cost of living crisis.

Things are even worse for Chancellor Olaf Scholz, whom half of Germans believe is not fit to serve as Germany’s Chancellor, according to data published by Die Welt.

The publication reported that just 38 percent of citizens believe the politician from the left is qualified for the job. That compares with 50 percent who are actively unsure.

For the hard-left “Traffic Light”It is now unlikely that three of the major parties in coalition would even have the necessary seats to lead the country if elections were to be held today.

By contrast, the populist Alternative für Deutschland (AfD) has seen its support surge, with 15 per cent of people nationally saying they would vote for the party in the next election.

This number increases even further when only the east of the country — which experienced the horrors of Communism first-hand — is polled, with the AfD constituting the second most popular party in the region at 27 per cent of the vote.