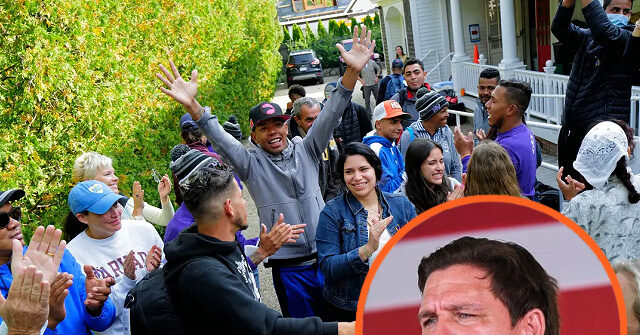 As Breitbart News reported on Tuesday, the migrants sued the governor, claiming that he violated their Fourth and Fourteenth Amendment rights by being deceived into taking the trips up to the wealthy liberal enclave.

The lawsuit filed by lawyers with the non-governmental organizations (NGOs) Alianza Americas and Lawyers for Civil Rights said:

The Doe Defendants made false promises and false representations that if the individual Plaintiffs and other class members were willing to board airplanes to other states, they would receive employment, housing, educational opportunities, and other like assistance at their arrival,” said the lawsuit filed by lawyers with the non-governmental organizations (NGOs) Alianza Americas and Lawyers for Civil Rights.

In fact, Defendants had made no arrangements for employment, housing, educational opportunities, or other assistance for the individual Plaintiffs or other class members at their destination. Defendants had not even notified any governmental or non-profit entity that could provide such services that the individual Plaintiffs and their similarly-situated class members would be arriving.

The office of Ron DeSantis responded to the lawsuit on Tuesday, saying the migrants made a voluntary journey to Martha’s Vineyard and that they were well cared for.

If these activists spent even a fraction of this time and effort at the border, perhaps some accountability would be brought to the Biden Administration’s reckless border policies that entice illegal immigrants to make dangerous and often lethal journeys through Central America and put their lives in the hands of cartels and Coyotes.

Fenske provided even a copy the consent form to which migrants had to agree before they boarded the plane.

You can use the English or Spanish versions of this form.

“I agree to hold the benefactor or its designed representatives harmless of all liability arising out of or in any way relating to any injuries and damages that may occur during the agreed transport to locations outside of Texas until the final destination in Massachusetts.

Fenske added that the immigrants were homeless and abandoned and that activists cared nothing for them until they were shipped to Martha’s Vineyard:

Florida’s program gave them a fresh start in a sanctuary state and these individuals opted to take advantage of chartered flights to Massachusetts. It was disappointing that Martha’s Vineyard called in the Massachusetts National Guard to bus them away from the island within 48 hours.

As millions of Americans I was horrified by the sight of immigrants being transported across America on planes and buses to serve as political props. It is clear that transporting children and families across state borders under false pretenses can be morally wrong, although it could also be illegal.

“I strongly urge the U.S. Department of Justice (US DOJ) to open an investigation into possible criminal or civil violations of federal law based on this alleged fraudulent scheme,”He concluded.

Speaking to reporters in Martha’s Vineyard near the shelter where migrants were being housed, immigration attorney Rachel Self also accused DeSantis of “kidnapping”Send the migrants to an island, where millions of people vacation.

NEW: Immigration attorney Rachel Self is here at St. Anthony’s Church on Martha’s Vineyard and has been interviewing Venezuelan migrants about how they got here. This is the whole thing she calls “kidnapping.” #WBZ pic.twitter.com/Rs5NfI49WP