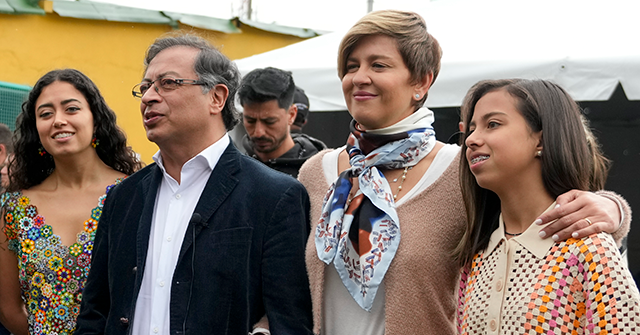 The campaign of Marxist ex-guerrilla member Gustavo Petro, who won the first round of Colombia’s presidential election last month, faced unexpected turmoil this week after a leaked video began circulating of Petro’s wife Verónica Alcocer saying that “all” women in journalism only enter the field to marry wealthy moguls.

The video, undated and circulating among various Colombian media, added controversy to a week already complicated by Petro’s daughter Sofía telling the Spanish newspaper El País that violent “social unrest” would engulf the nation if her father did not win the election. Colombia has faced multiple waves of Marxist violence — including terrorist bombings of police stations, looting, robberies in residential communities, and attacks on churches — since 2019. Petro lost the 2018 election to outgoing President Iván Duque.

Colombians will choose between Petro and rival businessman Rodolfo Hernández on Sunday. Petro and Hernández were the top two vote-getters in the first round of voting in May but, as neither received 50 percent or more of the vote, resulting in this weekend’s runoff.

Petro is an avowed Marxist former mayor of Bogotá, the nation’s capital, and former member of the M19 Marxist guerrilla. Hernández is a businessman in the construction industry that has largely abstained from any clear ideological stances, instead campaigning generally as an anti-corruption outsider. The conservative candidate, Federico Gutiérrez, did not make it into the runoff, leaving voters with no conservative candidate.

Alcocer, who loudly and aggressively identifies as “feminist,” became the subject of a campaign controversy this week after a video surfaced of her attending a virtual campaign strategy meeting. The short video did not include context, but Alcocer can be heard insulting a journalist from Colombia’s Caracol radio, before remarking on women in journalism generally.

“It all goes well for them because they all come in as reporters and end up marrying the owners. That’s what they’re there for. What did you think?” Alcocer says in the video. In Spanish, the word for “them” is clearly conjugated to refer to only females.

The video did not offer context or a date as to when the remark occurred, but Alcocer appears to have confirmed that it was her speaking in the footage with an apology to those she “may have offended” in a combative statement describing the audio as “illegal.”

“I ask sincerely for apologies from the journalists who I may have offended in the illegal and out-of-context recordings that do not represent my ideas,” Alcocer wrote. “This was a discussion that was recorded and filtered in a dishonest way to hurt candidate Gustavo Petro and our family.”

Many of the nation’s most high-profile women in journalism issued statements condemning Alcocer’s remarks.

“How DISGUSTING that the wife of Gustavo Petro, Verónica Alcocer, thinks that a woman journalist or in any profession has to prostitute herself to get ahead. RESPECT!” wrote Semana magazine columnist María Andrea Nieto. “Don’t they claim to be progressive? Lies!”

“Single mom at 19, clothes saleswoman, silver [saleswoman], waitress at a pizzeria, I managed to study with a lot of effort and after over 18 years as a roving and late night beat reporter, today I am a radio show host, TV anchor — and I did not marry or sleep with the owner,” Karla Arcila, host on Colombia’s RCN network, proclaimed.

Alcocer has spent much of the rest of the week making loud declarations of feminism in interviews and on social media.

In an interview with the Colombian newspaper El Tiempo on Thursday, Alcocer claimed that the growing number of leaks of her remarks during talks with campaign strategists were inherently “sexist.”

“I think there is a lot of sexism,” Alcocer told the newspaper in response to a question about a different leak in which she complained, in a meeting with campaign strategists that Petro was also clearly present in, that he was too “stubborn” and “lefty” and demanded that his advisors “tell him things he doesn’t want to hear,” namely that he needed to moderate his message to avoid appearing “Castro-chavista.”

“I think there is a lot of sexism. The least sexist is my husband. I am a feminist, which is not to say against men, but putting oneself in a position to value and respect the rights of women as much as the rights of men,” Alcocer told El Tiempo.

Alcocer then went on to all Colombian men — and women — “very sexist.”

“We are all a little bit sexist and this should be corrected with love, not by saying ‘I hate men,’” she added.

In the interview, Alcocer also addressed comments by her daughter Sofía Petro this week warning that a vote against her father was a vote in favor of leftist riots.

“We are getting to know who Rodolfo Hernández really is and we can’t let him become president,” Sofía Petro said in an interview with El País. “I think, in my view, that if that ends up being the case, it could cause social unrest much worse than what we saw last year.”

Alcocer criticized the media for speaking to her daughter at all, a 20-year-old student living in France, and insisted that she did not expect any violence or unrest in response to the results of the election.