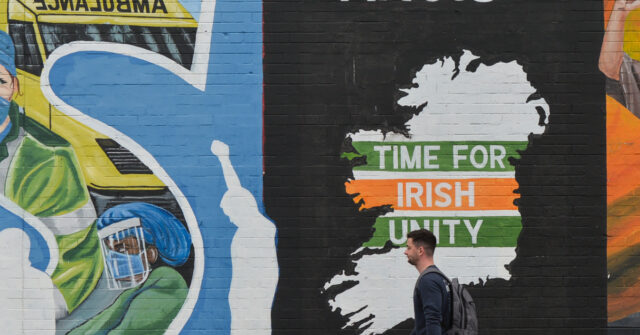 The number of Catholics in the region has exceeded that of Protestants, for the first time, since independence. This could have an impact on Brexit tensions.

According to data from the census released Thursday, there is now more Catholics living in Northern Ireland than people who are Protestants.

Since long before the region — which is a full and equal part of the United Kingdom on a par with England, Scotland, and Wales — became largely self-governing in 1921, religious identity has largely been seen as a de facto indicator of sectarian allegiance, with Protestants being seen as largely pro-UK Unionists while Catholics are almost overwhelmingly Irish Nationalists who want to join the remaining 26 Irish counties outside of the United Kingdom.

While the position of Northern Ireland within the United Kingdom has been a battleground of ethnic conflict for around a century now, since the Brexit vote in 2016, it has also served as a major point of contention between the UK and the European Union, with bigwigs in Brussels frequently demanding to have greater powers in Northern Ireland for the sake of appeasing the will of Irish nationalists who are loyal to a nation within the EU.

Data from the Northern Ireland Statistics and Research Agency shows that 45.7 percent of the population in this region identify Catholicism either as their current or childhood religion. This compares to the 43.5 percent who describe a Protestant or another denomination as their faith or were raised with.

Just over 9 per cent of respondents to the census — which was conducted in 2021 — described themselves as both having no religion and being brought up with no religion.

Things become more complicated when examining the issue of national identity, with a plurality of 42.8 per cent of respondents replying that they were British on the survey, compared to 33.3 per cent who identified themselves as being Irish.

As was the case with the questions about Protestant faiths and British identity, there is a trend towards fewer British people identifying as British. Since 2011, the population of British-born people has declined by more than 65,000, while people from Ireland have grown to over 100,000 in the same period.

The shift in demographics has already had a significant impact on the sectarian politics of Northern Ireland, with an election earlier this year seeing a nationalist political party — Sinn Féin — winning the most seats in the local legislature out of any other party for the first time ever.

This has seemingly emboldened the separatist aspirations of pro-Irish nationalists in the region, with the party’s all-Ireland leader — who sits as the leader of the opposition in the southern Republic — Mary Lou McDonald, saying she now wants to see a referendum on Irish reunification within the next five years.

This demographic shift will have significant ramifications for UK politics. The EU is very interested in the region, as Britain has left it.

With it being demanded by nationalists in the region that no border — economic or otherwise — is ever put up between the north and south of Ireland, Brussels has managed to wrestle much control of the region away from Britain, with the so-called “Conservative and Unionist Party” even initially agreeing to split the six-county area off from the rest of the UK single market so as to not to jeopardise the integrity of the EU’s internal free trade arrangements.

Attempts by the UK’s new government under Prime Minister Liz Truss to rip up parts of this agreement — titled the Northern Ireland Protocol — have prompted outrage not only from the seats of power within the European Union, but also from Washington D.C., with the country’s democratic government repeatedly threatening to torpedo any prospective free trade agreement between America and Britain should Westminster fail to agree any treaty changes with Brussels beforehand.

This extreme position by the U.S. government comes as no surprise considering the long-standing allegiances of the Democratic party with Irish-Americans. President Joe Biden has repeatedly stated that he is an Irish-American. “Irish”Public.

Images of the Queen Burnt on Bonfire in Sectarian Northern Irelandhttps://t.co/1VagWSgyht

All these factors could only worsen already inflamed tensions. This region has witnessed hundreds of decades of violence, that was widespread up until the 1990s.

In particular, Unionists in the region — who have already been put under pressure by political talking heads in London repeatedly abandoning them on a wide variety of issues — have been confronted with the idea of being split off from their own country as a result of demographic shifts, with some worrying that an economic split with the UK implemented by the EU could naturally creep into a major political split, and even Irish Unification.

The largest pro-British party, the Democratic Unionist Party has protested against such an option. They refused to enter a power sharing agreement with nationalists to allow the region to self-govern.

Meanwhile, Sinn Féin has found itself with a strange bedfellow in the EU, with both groups now quietly wanting the UK’s Brexit vote to result in a United Ireland, with the former desiring it for nationalistic reasons, while the latter appears to desire it to show that leaving the ever-more-centralised union will only result in disaster for those who dare to be free.

Such an alliance is particularly ironic considering Sinn Féin’s history, with Mary Lou McDonald once even sharing a stage with arch-Brexiteer Nigel Farage during a debate on the EU forcing Ireland to vote again after the country’s population rejected the bloc’s Lisbon Treaty.

Both UKIP and Sinn Féin campaigned against the referendum, with then-party leader Gerry Adams describing it as a “bad treaty”The EU ordered that it be renegotiated because the Irish people had rejected the deal in a referendum.