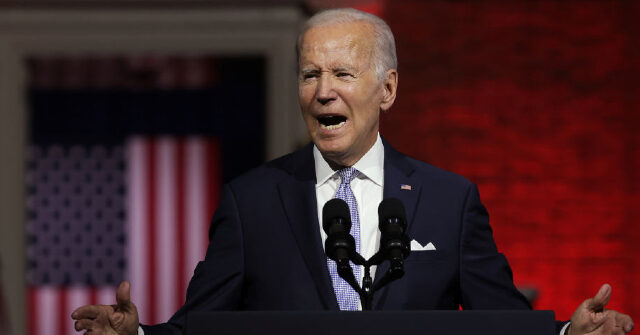 Rosh Hashanah (the Jewish New Year) begins Sunday evening. It’s a time for asking forgiveness of others, and for finding ways to reconcile.

But with many Americans worried that we are on the brink of some kind of civil war, and a large majority of Democrats convinced there are tens of millions of supporters of Donald Trump preparing to overthrow the government by force, President Joe Biden has clearly failed to unify the country, as he promised to do in his Inaugural Address last year.

Biden, instead of reconciling Americans with one another is inflaming hate. Biden’s terrifying September 1 speech in which he called on for “continued battle”For “MAGA Republicans,”who he claimed were his a “threat”To the country, he made it clear that he does not want unity.

It is an election year, so there will be divisions and discontent. Biden went too far with his rhetoric of partisanship, and insulted a substantial portion of Americans that he is responsible for.

What was also unique about Biden’s speech is that he took the lead in dividing the country. He was content before to allow Democrats in Congress to do this.

When the Senate decided to put former President Trump on trial — for the second time, and without clear authority to do so — the White House was content to let it do so. And when the House January 6th Committee began its show trial, the White House cheered but did little to participate, other than waiving Trump’s executive privilege.

Biden now leads the charge “battle,”Trying to turn the 2022 midterm elections about Trump. He hopes to reduce Democrat losses while strengthening his presidency.

Biden could have chosen to follow the path of magnanimity. Perhaps he could have seen that the majority of January 6th protesters were there as they didn’t trust the 2020 election outcome. Maybe he could have called on real reforms in voting that would not just help his party, it also improved credibility and integrity for the whole system.

While punishing the violent perpetrators of the riot, Biden could have offered clemency to the rest — those who were merely trespassing, just like the millions of illegal border crossers whom Biden has chosen not to prosecute are also trespassing.

His behavior is not consistent with reconciliation. He is quick to undermine bipartisan compromises with Republicans by pushing for his own partisan agendas, even though he was able make them.

For example, on gun control, he achieved the first bipartisan agreement in many decades. Republicans agreed to finance it. “red flag” laws and some expanded background checks — then promptly demanded a new ban on so-called “assault weapons.”

When Republicans agreed to a deal on a $2 trillion infrastructure bill, one that would exclude Biden’s ambitious spending plans, he pocketed their concessions and immediately put the rejected spending proposals in his “Build Back Better” bill.

Two Democrat senators opposed the bill, which was defeated. Biden used the same tactics to pass the CHIPS Act. Republicans agreed with Biden that they would not support a large climate spending bill. Biden nevertheless signed the so-called “The” “Inflation Reduction Act,”This has very little to do inflation. Even now, even “side deal” to expand fossil fuel production, which was crucial to secure Sen. Joe Manchin (D-WV)’s vote, is in danger of failing.

Biden’s philosophy seems to be that “unity”This means one side will get what they want, but then demand more. That is not the spirit that the Constitution Framers sought to reconcile, in which they agreed to put aside their differences and work together. “a more perfect Union”; or even the generosity with which victorious black civil rights leaders often forged new relationships with, and forgave, the white Democrat segregationists who had tried to suppress them (and who were Biden’s earliest Senate allies).

We have lost touch as a country with reconciliation.

In 2020, with the flames of the Black Lives Matter riots still smoldering, Congress approved a proposal to rename ten military bases named for Confederate generals — names that were adopted in the spirit of post-Civil War reconciliation. Although the notion of reconciliation between white southerners and northerners was true, it was not new and probably outmoded. But, this was an ominous sign about the future.

Biden’s 36-year tenure in the Senate, which is more inclined to compromise, was sold to Americans as someone who could unite the country. But while Biden might have been a back room wheeler-and-dealer — a skill from which his family’s personal interests also benefited — he was, for 36 years, one of the most divisive members of the Senate, especially on the Judiciary Committee, which he turned into a battlefield.

The angry, shouting bully at Independence Hall is just as much a part of Biden’s personality as the grandfatherly, grieving, touchy-feely figure his campaign tried to emphasize in 2020. And his hostility has amplified his party’s worst tendencies. Now, we see former moderate Rep. Tim Ryan of Ohio (D-OH), talking about the necessity to “kill and confront”The MAGA Movement; We hear that the gun-controlling feminist Senator Mazie Hirono, D-HI is issuing a “call to arms”Her Republican co-workers.

David Corn, a left-wing journalist defended such rhetoric this week by citing Abraham Lincoln — who, he said, had no empathy for those who “threatened the union.”It’s possible, perhaps, that Lincoln, at the close of Civil War, famously stated during his Second Inaugural. “With malice toward none, with charity for all.”Biden and his party showed more compassion for military foes than he did to political opponents.

If there is to be reconciliation, it must begin with Demcorats’ defeat.

Joel B. Pollak serves as Senior Editor at Large for Breitbart and hosts the show. Breitbart News SundaySirius XM Patriot Sunday Evenings, 7 p.m.-10 p.m. ET (from 4 p.m. until 7 p.m. PST). Author of the e-book Neither Free nor Fair, The 2020 U.S. Presidential Election. He recently published a book called “Neither Free nor Fair: The 2020 U.S Presidential Election.” ROLRED NOVEMBERHe tells the story from a conservative viewpoint about the 2020 Democratic presidential primaries. He was awarded the Robert Novak Journalism Alumni Fellowship in 2018. Follow him at Twitter @joelpollak. 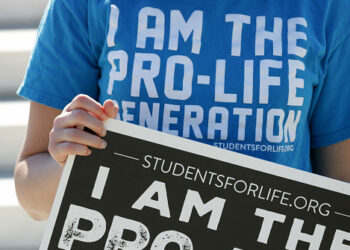