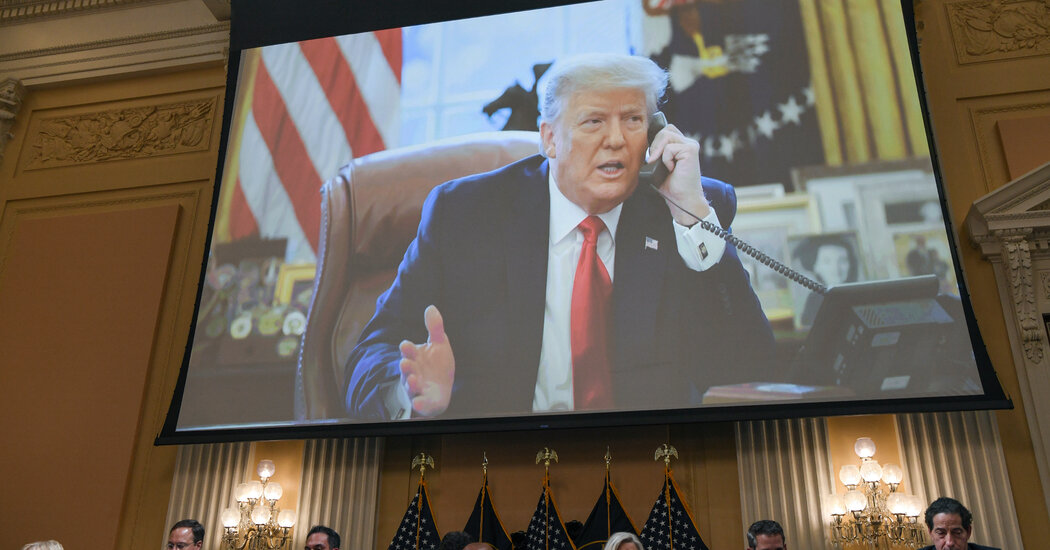 WASHINGTON — It was all a lie, the tales of stuffed ballot drop boxes, rigged voting machines, and constitutional “flexibility” that would have allowed Vice President Mike Pence to nullify the 2020 election results and send them back to Republican state legislatures.

The first three hearings of the House Jan. 6 committee have deeply undercut, if not demolished, the postelection myths repeated incessantly by former President Donald J. Trump and his supporters and embraced and amplified by Republicans in Congress.

A parade of Republican witnesses — his attorney general, William P. Barr, his daughter Ivanka Trump, and his own campaign lawyers — knew he had lost the election and told him so. Mr. Trump was informed that the demands he was making of Mr. Pence to block his defeat unilaterally were illegal. Even the most active coup plotter, the conservative lawyer John C. Eastman, conceded before Jan. 6 that his scheme was illegal and unconstitutional, then sought a presidential pardon after it led to mob violence.

Yet the most striking revelation so far may be how deeply Mr. Trump’s disregard for the truth and the rule of law have penetrated into the Republican Party, taking root in the fertile soil of a right-wing electorate stewing in conspiracy theories and well tended by their media of choice. The Republican response to the hearings — a combination of indifference, diversion and doubling down — reflects how central the lie of a stolen election has become to the party’s identity.

In Washington, Republicans in Congress have neither broken with Mr. Trump nor expended much energy trying to rebut the investigation’s findings. And from Nevada’s secretary of state race to Michigan’s contest for governor, Republican candidates have embraced the fictional conspiracy in their 2022 campaigns.

“I have been fighting for safe, honest and transparent elections since before Jan. 6, and that fight continues,” said Michigan State Representative Steve Carra, whose re-election run has been blessed by Mr. Trump and who said Friday he has watched some but not much of the hearings. “Absentee ballots sent out unsolicited, signature verification relaxed, drop boxes all over the place, especially in Democratic area — it all deserves further scrutiny.”

Like mint in the garden, the seeds that the Trump team planted between Election Day 2020 and Jan. 6, 2021, are now growing out of control, aided by the former president’s allies.

Jarome Bell, a leading candidate to challenge Representative Elaine Luria, Democrat of Virginia, has been traveling her Republican-leaning district showing voters a film by the right-wing provocateur Dinesh D’Souza that pushes the bogus fraud claims. The hearings, he said on Friday, have had “no impact on me. ‘2000 Mules’ has a bigger impact on what truly happened.” He added, “the 1/6 commission is the cover-up.”

Jon Rocha, a candidate for state representative in Michigan who has Mr. Trump’s backing, also cited the film and bragged that he had watched none of the hearings, “not even a 30-second clip.”

One reason the falsehoods have flourished is the failure of Republicans who do not believe them to push back. Before the Jan. 6 hearings began, Republican leaders promised a robust “rapid response” effort to counter the narratives that would emerge.

But there has been no such pushback from the Republican National Committee or any other organization to revelations that Mr. Trump continued to pressure Mr. Pence to overturn the election results, even after having been told doing so was illegal.

No Republican leader offered a response to the testimony of retired federal appeals court Judge J. Michael Luttig, a revered conservative, who said on Thursday that Mr. Trump gave Mr. Pence an order whose execution would have prompted “the first constitutional crisis since the founding of the Republic.”

None bothered to counter the panel’s finding, revealed on Monday, that Mr. Trump and his campaign raised hundreds of millions of dollars from supporters based on the false pretense of massive election fraud, using money collected for an election defense fund that did not exist.

Senator Mitch McConnell of Kentucky, the Senate minority leader, has chosen not to engage on the issue at all. And to the extent that they are trying to counterprogram the hearings, House Republicans have been prodding voters to look elsewhere — to rising gas prices, inflation and migrants at the southern border.

Only Mr. Trump seems particularly irritated by the exercise, appalled by the testimony of his daughter, who shared details of his abusive phone call with Mr. Pence on the morning of Jan. 6 and said she trusted Mr. Barr’s judgment when he said that the 2020 election was not stolen.

“It’s a one-way street, it’s a rigged deal, it’s a disgrace,” a thoroughly unrepentant Mr. Trump said on Friday at a speech in Nashville in which he called Jan. 6 “a simple protest that got out of hand” as he continued spinning out false claims and grand conspiracy theories of election fraud.

But if his allies in Republican leadership are not countering the message that the attack was fueled by lies, neither are they acknowledging that the election was not stolen.

And 50 years to the day after henchmen of Richard M. Nixon broke into Democratic headquarters in the Watergate Hotel, the hearings sparked by the two scandals are highlighting just how dramatically the Republican Party has changed. Then, key Republican leaders reacted to increasingly damning revelations about their president by siding with the Democrats and forcing Mr. Nixon from power. Today, Republican leaders are either silent or contemptuous of the committee uncovering a steady stream of misdeeds by Mr. Trump.

Representatives Bennie Thompson, Liz Cheney, and Adam B. Schiff “will not stop lying about their political opponents,” Representative Kevin McCarthy of California, the Republican leader, wrote on Twitter, referring to the Democratic chairman from Mississippi, Republican vice chairwoman from Wyoming and Democratic member from California.

Representative Peter Meijer of Michigan, one of 10 Republicans who voted to impeach Mr. Trump for inciting Jan. 6, said the hearings have so far been “a reminder of how deeply divided, even from an information consumption standpoint, we are.”

Many of his constituents have not even seen the videotaped testimony laying out the case against Mr. Trump — only footage of police removing barricades to let rioters into the Capitol on Jan 6. Some blame nonexistent F.B.I. provocateurs for the violence, in line with a debunked conspiracy theory embraced by the Fox News host Tucker Carlson and others on the right.

Mr. Meijer said he has heard far more from constituents on the right lamenting the “Jan. 6 political prisoners” than those in the center demanding accountability for the attack.

Most voters, though, are not paying attention, said Representative David Valadao of California, another Republican to vote for impeachment.

“Talking to voters at home right now — I mean, the fuel prices, food prices, baby formula, you name it,” Mr. Valadao said. “There’s just so many things that people are focused on right now that they’re just not paying attention to the Jan. 6 stuff as much as I know a lot of folks would want them to.”

Asked if the hearings might do Republicans a favor by making it easier to find an alternative presidential nominee in 2024 than Mr. Trump, he responded: “I don’t know if enough people are paying attention where it’ll have that big of an impact.”

But in a Republican primary season fueled by pro-Trump fervor, many candidates have emerged as their party’s nominees for top offices in large part because they campaigned on the falsehood that the 2020 election was stolen by President Biden.

Mayra Flores, a Texas Republican who won a House seat in a special election on Tuesday, has declined to say whether Mr. Biden won in 2020, telling The San Antonio Express-News: “I’m speaking just in general. There is voter fraud.”

And there is more to come. State Representative Ron Hanks, vying to challenge Senator Michael Bennet, a Democrat, in Colorado’s Republican primary June 28, marched to the Capitol on Jan. 6 and launched his campaign with an ad showing him shooting a fake Dominion voting machine, a device central to a sprawling conspiracy theory about votes purportedly stolen by foreign powers from Mr. Trump.

On Monday, the committee showed a videotaped deposition in which Mr. Barr at one point could barely suppress his laughter at the absurdity of such stories and testified that Mr. Trump would have had to be “detached from reality” if he believed them.

In Michigan, a wild contest to choose the Republican to challenge Democratic Gov. Gretchen Whitmer is narrowly led by Ryan Kelley, a real estate broker who was arrested this month and charged with participating in the Jan. 6 riot. Mr. Rocha, the state house candidate in Western Michigan, said voters were far more concerned about gas prices and empty store shelves than the Jan. 6 hearings, then offered that voters in fact are still very angry about “election integrity.”

“They did it in 2020. Now they’re finding new avenues to remove Republicans from the ballot this year,” he said.

In Arizona, the leading Republican candidate for governor, Kari Lake, has made her “stolen election” claims central to her campaign. Mark Finchem, a candidate for secretary of state, was at the front steps of the Capitol on Jan. 6. And Blake Masters, who hopes to challenge Senator Mark Kelly, the incumbent Democrat, suggested baselessly that “one-third of the people outside of the Capitol complex on Jan. 6 were actual F.B.I. agents.” 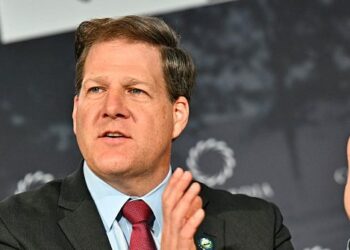 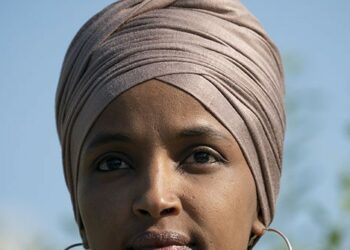 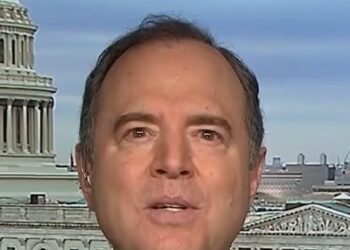 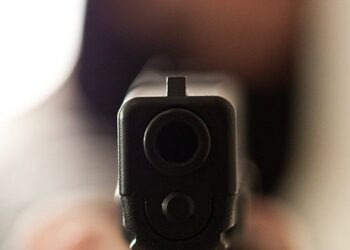 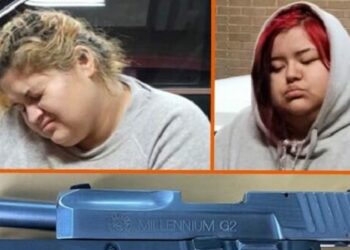