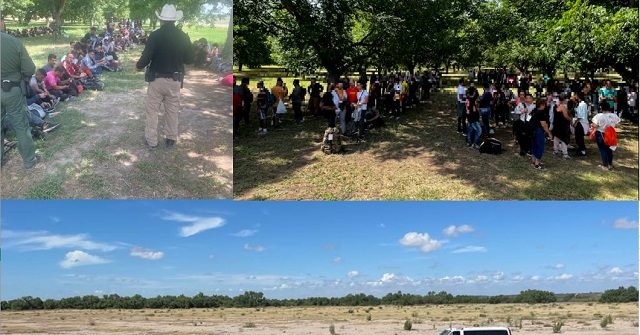 After Friday’s close, the report shows that Border Patrol agents arrested 221,181 migrants in December at the southwest border sector. With this, the fiscal year total amounted to 633.451. In contrast, during the entire FY2020, President Donald Trump’s last full fiscal year in office, agents apprehended a total of 400,651.

Agents have apprehended over 2.3 million migrants in the past twelve months.

“This new migration challenge is not unique to the United States,” Miller deflected. “There are 2.5 million Venezuelans now living in Colombia and 1.5 million in Peru; Brazil and Chile are hosting more than 350,000 Haitians, and the number of displaced Nicaraguans in Costa Rica has more than doubled in the last 12 months alone.”
“In December, the large number of individuals fleeing failing communist regimes in Nicaragua and Cuba contributed to an increased number of migrants attempting to cross the border,”CBP officials said.

In response, Lora Ries, former acting DHS deputy chief of staff and director of the Heritage Foundation’s border security team wrote, “It’s easy to get lost in all the numbers, but don’t let this one pass by without being shocked and outraged. Biden’s border crisis is literally historic and has been for years now, but this is simply a devastating number.”

“For the second time, Biden’s CBP needs to make a bigger chart to visualize this historic number,” Mora added. “More than 250,000 apprehensions—and that doesn’t even include the rising number of got-aways—mean that even more Border Patrol agents are being pulled off the line to process and release illegal aliens into the interior so that the Biden administration doesn’t get stuck with embarrassing photos of overcrowded facilities.”

This was revealed in El Paso Sector, where nearly 56,000 migrants were apprehended in December. Breitbart reported on Border Patrol Processing and Detention Centers that could hold around 3,500 persons. In mid-December they were full to the point where more than 5,600 migrants arrived.

NGO shelters were forced to close their doors to new migrants after the Border Patrol dumped more than 10,000 people onto the city’s streets in freezing weather conditions in a single week. In December, the mayor of El Paso declared a state disaster due to the massive influx of migrants.

It was not a humanitarian catastrophe that President Joe Biden witnessed during his Potemkin Village tour to El Paso, January. This happened after Border Patrol agents and El Paso police swept out migrants and drove them across the border into Mexico.

Texas Governor Greg Abbott met President Biden on the tarmac at the El Paso airport and handed the president a scathing letter regarding the federal government’s failure to secure the border during this administration.

Abbott wrote: “Your visit to our southern border with Mexico today is $20 billion too little and two years too late. Moreover, your visit avoids the sites where mass illegal immigration occurs and sidesteps the thousands of angry Texas property owners whose lives have been destroyed by your border policies.”

U.S. Representative Pat Fallon submitted articles of impeachment to DHS Secretary Alejandro Mayorkas, earlier in the month. This was due to Mayorkas’ failures at enforcement of federal immigration and border security law.

“Since day one, Secretary Mayorkas’ policies have undermined law enforcement activities at our southern border,”Fallon stated this in a Fox News statement. “From perjuring himself before Congress about maintaining operational control of the border to the infamous ‘whip-gate’ slander against our border patrol agents, Secretary Mayorkas has proven time and time again that he is unfit to lead the Department of Homeland Security.”

Bob Price serves as associate editor and senior news contributor for the Breitbart Texas-Border team. He was an original member on the Breitbart Texas team. Price is a regular panelist on Fox 26 Houston’s What’s Your Point? Talk show Sunday mornings Follow him Twitter @BobPriceBBTX.