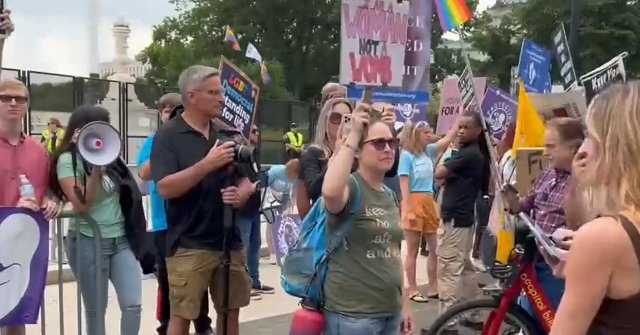 At a protest outside of the U.S. Supreme Court, a pro-abortion activist made obscene gestures and shouted at college students for their rights. Both activists are waiting to see if a decision will be made that would reverse the trend. Roe v. Wade

The Supreme Court was surrounded by college students. Pro-life students were harassed by counter-protesters.

Julio Rosas (Senior Writer at Townhall.com) tweeted the following video. It shows a woman screaming profanities at her students. After that, she gestures with an offensive hand.

Pro-abortion demonstrator heckles Students for Life activists, and she says to them: “suck my dick, bitch”And mimics are jerking off.

Although it was difficult to hear her, she probably said the following:
“You will not take my right away! I will always get an abortion! I’ll go in a back alley and will fucking die!” pic.twitter.com/5LDKPahzK0

“You will not take my right away!”She shouted. “I will always get an abortion! I’ll go in a back alley and will fucking die!”

After a draft opinion was leaked in the case against, protests erupted outside of the court. Dobbs v. Jackson Women’s Health Organization. This case revolves around a Mississippi law that prohibits abortion after 15 weeks. This leak raised concern from the left. Roe v. WadeThis would result in the decision being reversed.

Republicans in the U.S. House of Representatives urged Merrick Garland, U.S. attorney general to look into vandalism and violence against pro-life centers throughout the U.S.

What’s so flabbergasting to me is that Merrick Garland was a federal judge. For a decade, he served alongside Justice Kavanaugh. I don’t understand why we’ve seen in him — as attorney general — really just allowing the most radical liberal voices to just run ramshackle over all of what the Department of Justice’s real priorities ought to be.

This is a serious issue, and by ignoring it this long, it’s just grown in magnitude. . … Merrick Garland is really the only person that has really actually condemned some of this, but even so, it’s been very, very slow in coming, and I think we haven’t seen actual action on the part of the Department of Justice to say, ‘Hey guys, you’re now on notice that we’ve let you walk around here, so far. We’re going to be starting to prosecute. So please leave, or we’re going to be arresting you.’ … It’s not just saying, ‘These laws are on the books,’ but, ‘We’re not going to enforce them.’ That is not a good way to go about law enforcement.

Bob Price serves as associate editor and senior news contributor for the Breitbart Texas-Border team. He was an original member on the Breitbart Texas team. Price is a regular panelist on Fox 26 Houston’s What’s Your Point? Talk show Sunday mornings Follow him Twitter @BobPriceBBTX and Facebook.