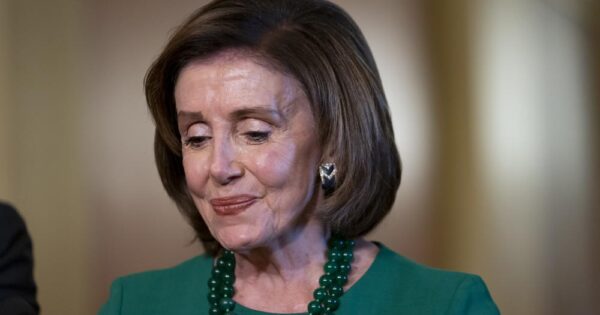 Russia’s war in Ukraine has dragged for more than 100 days, and our politicians still can’t manage to keep the name of Ukraine straight.

Pelosi hopes for the COMPETES Act to reduce costs by decreasing dependence on foreign supply. Trying to deflect blame from the Biden administration, the House speaker blamed supply crunches caused by, in her words, “the war in Iraq.”

By confusing Ukraine with Iraq, Pelosi joined the ranks of former President George W. Bush. In a characteristic Bushism from last month, the former president referred to the Russo-Ukrainian War as “a wholly unjustified and brutal invasion of Iraq.”

Pelosi also seems to be taking after the current president. During his State of the Union address, Biden mispronounced “Ukrainian” as “Uranian,” which sounds more like an element than a nationality.

The House speaker brought a cue card with her, but she slipped anyway.

Pelosi blames high prices on COVID and the “war in Iraq” pic.twitter.com/iR8hdu5WNm

Pelosi made the gaffe while discussing the affordability crisis. She blamed inflation on the war, pandemic-era breaks in the world’s supply chains and — of course — the greed of corporate boogeymen.

“We want to break the grip of foreign supply on American kitchen tables,” she said. “Largely the price at the pump is about supply. Supply is down. Cost is up. The war has attributed enormously to that, but there is also price gouging.” “There’s some corporate greed involved in this price at the pump as well.”

Pelosi also touched on her legislative proposals intended to confront inflation. She calls the press conference expressly to discuss the Lower Food and Fuel Costs Act. Plus, She mentioned not only the COMPETES Act, but also the Ocean Shipping Reform Act. She planned for Biden to sign the latter act sometime on Thursday.

“How do we address the inflation issue? We do so by increasing supply at home and doing so in a way that has a direct impact on families at America’s kitchen tables. In the negotiations on COMPETES , we are narrowing it down,” Pelosi said.

“It just says we’re going to make more of it in America, whether it’s the factors of production or the products themselves with all of the constraints that COVID has played. Look, we had the war in Iraq. We have COVID, which has really deterred more product coming into our country either by design or just by marketplace factors.”