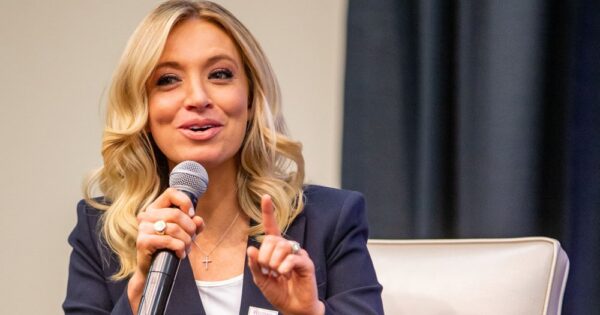 Fox News commentator Kayleigh McEnany has remained in the public eye since first joining the White House as an intern under former President George W. Bush.

She has since passed personal milestones like earning a law degree from Harvard, working as White House press secretary for Donald Trump, and starting a family with MLB pitcher Sean Gilmartin.

Over 60? Shocking link between sex and cancer

On Thursday, she announced another milestone: a second child.

“So, my husband Sean Gilmartin and I are about four month pregnant,” McEnany announced on her talk show Outnumbered. “One day we were on the couch, and someone said “the five of us. And I’m like, ‘No, the six of us. There’s another one right here, and I knew the whole time.’”

McEnany already knows the baby’s gender, but she planned a gender reveal party for the public.

“We will reveal the gender in the coming weeks. We’ll do a little gender reveal on Outnumbered,” McEnany continued. “I can’t reveal the gender. It’s so difficult, because I do know. I’m not one of those people that can wait. I have a friend who’s waiting. But I know right now, and we’re going to reveal it here.”

Co-host Harris Faulkner asked, “Is it like a bonfire on the beach?”

“No, nothing like that,” McEnany said. Gender reveal parties attracted some controversy in 2020 after resulting in some fires.

“Right on the cusp of Fathers Day,” the guest, Brian Kilmeade, remarked. A co-host asked, “Is Sean going to come in?”

“Maybe I should have him in,” McEnany responded. “He’s really excited. He kept sending me songs this morning for the top of the show. I was like, ‘That reveals the gender. You can’t do that one.’”

Co-hosts and fans expressed their congratulations.

“He blessed that child with great parents,” one co-host said.

“All our blessings and love for you Kayleigh and your whole family and the baby to be,” co-host Emily Compagno added. “We love Baby Blake, we love Sean, and we can’t wait to love this new baby, too.”

“What a blessing! We prayed a lot about this, and God just blessed us with a child, a second child to join baby Blake, my daughter,” McEnany herself said, turning to the audience. “Thank you all for your support and for Fox. No more supportive workplace to be a working mom, I can tell you, than Fox News Channel… So, stay tuned.”

My husband, @GilmartinSean, and I are THRILLED to announce that I am almost 4 months pregnant with our second child, making Baby Blake a big sister. God has given us another incredible blessing!

Thank you to @FoxNews @OutnumberedFNC for allowing me to share this wonderful news! pic.twitter.com/X6e09sghct

Congratulations ! We are all excited for you! ❤️