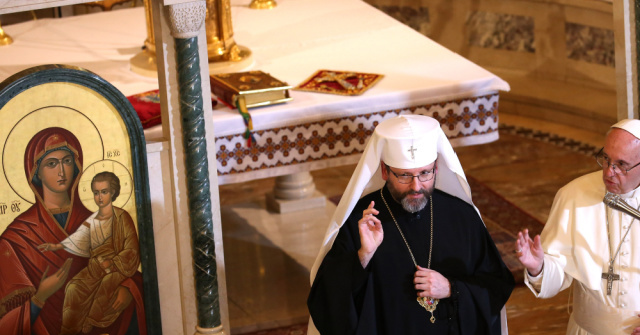 The sunshine of the Holy Spirit is very needed at this time “for those who are trying to understand the causes and consequences of this full-scale Russian aggression,” Archbishop Shevchuk mentioned in a video message. “Because we see that today the whole world is trying to deceive, to pretend that what is desired is real.”

“We see and know, experiencing here in Ukraine, that Russia’s aggression against Ukraine is completely unprovoked,” the archbishop continued. “Anyone who thinks that some external cause has provoked Russia into military aggression is either themselves in the grip of Russian propaganda or is simply and deliberately deceiving the world.”

The archbishop’s message follows exhausting on the heels of Tuesday’s publication of an interview during which Pope Francis declared that there are not any good guys and dangerous guys within the Ukraine conflict and that Russia’s invasion of Ukraine was probably provoked.

Within the interview with the Jesuit journal La Civiltà Cattolica, the pope steered {that a} confluence of things, together with “barking” by NATO and the worldwide arms commerce, contributed to Russia’s aggression. He cited an unnamed “very wise” head of state who instructed Francis previous to the conflict that he was “very concerned about the way NATO was acting.”

“They are barking at the gates of Russia. And they don’t understand that the Russians are imperial and they will not allow any foreign power to approach them. The situation could lead to war,” the nameless chief purportedly mentioned.

The hazard is that we “do not see the whole drama unfolding behind this war, which was perhaps somehow either provoked or not prevented,” the pope asserted. “And note the interest in testing and selling weapons. It is very sad, but at the end of the day that is what is at stake.”

The pope mentioned he’s “against reducing complexity to the distinction between good guys and bad guys without reasoning about roots and interests, which are very complex.”

“What is before our eyes is a situation of world war, global interests, arms sales and geopolitical appropriation, which is martyring a heroic people,” he asserted.

In Wednesday’s message, Archbishop Shevchuk sharply countered this thesis with out ever mentioning the pope’s title.

The presents of the Holy Spirit are needed in at this time’s world “so that the devil’s wiles do not deceive the human person,” the archbishop mentioned, as a result of “we live in a world of fakes, when what is desired is presented as real; when they try to pretend untruth and falsehood to be the only truth.”

The sunshine of the Holy Spirit is especially needed “for those who have special responsibilities, special types of service in the Church, society, and state,” he added.

It’s so necessary at this time “to understand the causes and consequences of this war,” Shevchuk mentioned. “Unfortunately, the causes of this war lie within Russia itself, inside it.”

“And the Russian aggressor is trying to solve its internal problems with the help of external aggression. He projects his illnesses onto others and blames the whole world for them,” he declared.

“That is why today we are praying for the Gift of the Holy Spirit for politicians, diplomats, church and religious figures,” he continued. “For the Lord God to give them this gift of reason, the ability to distinguish between causes and effects, the ability to see the depth of reality. And to distinguish truth from inspired lies and falsehoods.”

In reality, he insisted, “post-Soviet revanchism, which has emerged in a new guise today in such extreme Russian nationalism has clearly acquired genocidal features as the ideology of russkiy mir (‘the Russian world’). And Ukraine is its first victim.”