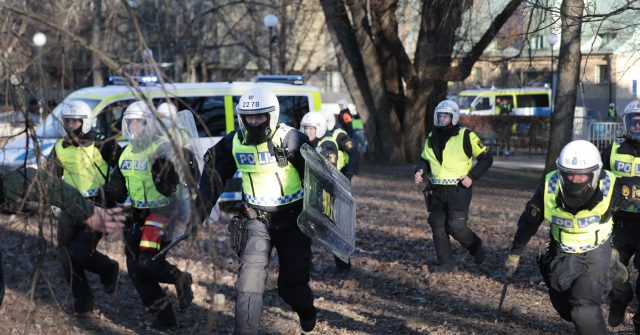 Swedish police officers offering testimony during a trial for those who participated in the Easter riots claimed they feared for their lives from the violent mob who reacted to the burning of the Islamic Qur’an by anti-Islam activists.

“I was really scared. I was absolutely convinced that I would be beaten to death if I were to fall or something like that,”According to broadcaster SVT, one of them told the court.

The scene was described by officers as officers trying to find shelter in the bus after the bus had been destroyed by the mob. They also stated that warning shots did not seem to be effective against the mob, who kept approaching officers.

An estimated 1,000 or so people took part in the riots in Örebro, which occurred in the Sveaparken park. Although 71 officers claimed that they were physically hurt during the riots, 64 additional officers also reported experiencing mental healing problems after the events.

The Easter Riots took place in several cities across Sweden over a period of several days and were linked to the Qur’an burning demonstrations held by Danish anti-Islam activist Rasmus Paludan and his group Stram Kurs (Hard Line).

It was discovered that at most 104 police officers sustained injuries in the chaos.

Swedish National Police Chief Anders Thornberg blamed criminal gangs for the violence at the riots stating, “These are not ordinary counter-protesters, we have strong suspicions that those who attack police and emergency services are connected to criminal gangs.”

But, the 34-year old Tajikistani immigrant was the first one to be convicted for crimes related to the riots. This man was also under a deportation order before his arrest.

A migrant man who attempted to throw a large stone at a Swedish police officer has become the first person convicted following the multi-day riots over Easter across Sweden in reaction to the burning of copies of the Islamic Qur’an. https://t.co/g1Tock2GsA