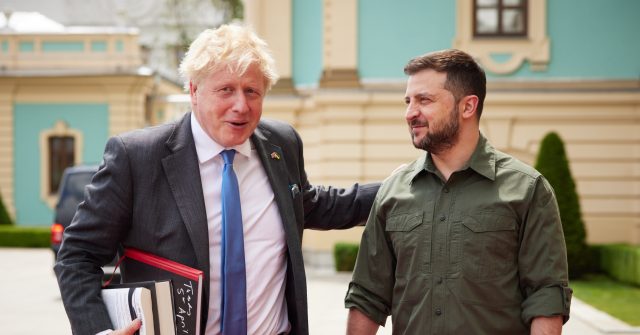 KYIV, Ukraine (AP) – British Prime Minister Boris Johnson said Friday on a surprise visit to Kyiv that “all the evidence” points to Russian forces “taking heavy casualties” in their ongoing invasion of Ukraine.

Johnson also promised continued military aid and training on new military equipment. He did not detail the equipment.

“We are with you to give you the strategic endurance that you will need,” he said.

THIS IS A BREAKING NEWS UPDATE. AP´s earlier story follows below.

The European Union´s executive arm recommended putting Ukraine on a path to membership Friday, a symbolic boost for a country fending off a Russian onslaught that is killing civilians, flattening cities and threatening its very survival.

It is good to be in Kyiv again. pic.twitter.com/wbpMuf6YqY

In another show of Western solidarity, British Prime Minister Boris Johnson arrived in Kyiv to meet with President Volodymyr Zelenskyy, his second trip to the country since the war began.

The possibility of membership in a union created to safeguard peace on the continent and serve as a model for the rule of law and prosperity fulfils a wish of Zelenskyy and his Western-looking citizens.

Johnson came with a pledge by Britain to lead a program that the U.K. said could train up to 10,000 Ukrainian soldiers every 120 days in an unspecified location outside the country.

The government said “international partners would be invited to host” the program, which Johnson said could “change the equation of this war.” Ukraine has been taking heavy casualties in the battle for the country´s eastern industrial heartland.

The latest embrace of Ukraine by its European allies also marks another setback for Russian President Vladimir Putin, who launched his war nearly four months ago, hoping to pull his ex-Soviet neighbor away from the West and back into Russia´s sphere of influence.

Johnson´s trip followed one by the leaders of Germany, France, Italy and Romania, who vowed in Kyiv a day earlier to support Ukraine´s fight without asking it to make any territorial concessions to Russia.

“Two months on from my last visit, the Ukrainian grit, determination and resilience is stronger than ever, and I know that unbreakable resolve will long outlive the vain ambitions of President Putin,” Johnson said.

Zelenskyy welcomed the visit, saying on Telegram, “We have a common view of the movement towards Ukraine´s victory. I´m grateful for a powerful support!”

At Russia´s showpiece economic forum in St. Petersburg on Friday, Putin reprised his usual defense of Russia´s war in Ukraine. He has alleged the invasion was necessary to protect people in parts of eastern Ukraine controlled by Moscow-backed rebels and to ensure Russia´s own security.

The European Commission’s recommendation that Ukraine become a candidate for membership will be discussed by leaders of the 27-nation bloc during a summit next week in Brussels. The war has increased pressure on EU governments to fast-track Ukraine´s candidate status. But the process is expected to take years, and EU members remain divided over how quickly and fully to open their arms to new members.

Political and military support for Ukraine from Western countries has been key to its surprising success in the face of larger and better-equipped Russian forces. Zelenskyy has also clamored for additional immediate support in the form of more and better weapons to turn the tide in the east, known as the Donbas region.

Russia pressed its offensive there Friday, leaving desperate residents struggling to make sense of what the future holds.

“We are old people, we do not have a place to go. Where will I go?” asked Vira Miedientseva, one of the elderly residents grappling with the aftermath of an attack Thursday in Lysychansk, just across the river from Sievierodonetsk, where a key battle is raging.