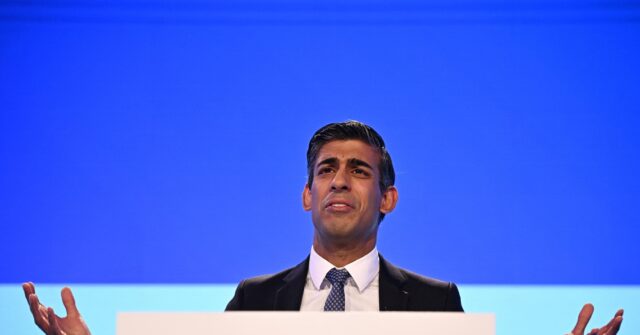 Delivering a speech to anti-Brexit bosses’ club the Confederation of British Industry (CBI) — which he alleged was “a valued institution in this country” despite its long history of bad calls — the newly-minted Prime Minister told his audience, much of it ravenous for already record levels of immigration to be further increased, supposedly in the name of filling shortages in the labour market, that “[p]art of the reason we ended Free Movement of Labour [with the European Union] was to rebuild public consent in our immigration system.”

“If we’re going to have a system that allows businesses to access the best and brightest from around the world we need to do more to give the British people trust and confidence that the system works and is fair,”He went on to describe what needed to be done to ease people’s concerns about mass migration, even though it was deeply controversial.

“That means tackling illegal migration,” he added — then moved swiftly on to topics less likely to rile a Conservative Party membership that didn’t even vote for him.

He was dragged back to the subject in the Q&A, however, with the BBC pressing him on the fact that big businesses “are saying we need looser immigration rules” — perhaps because more immigration generally means they can pay people less money — and asking whether he would sate their hunger for foreign labour.

“I think the country’s number one priority right now when it comes to migration is tackling illegal migration; it’s stopping people coming here illegally on small boats across the Channel — because when people see that happening it undermines trust in the system,”Sunak responded strongly, implying that, indeed, he was willing to grant bosses their wishes on mass immigration while highlighting his real and pretended efforts to address the smaller flows of illegal immigrants as distractions.

“It doesn’t seem fair that people are able to break the rules — and that’s what I’m absolutely determined to fix,” Sunak added — although even here he reiterated the government’s old lines the boats crisis is “not a simple problem to solve” “we can’t solve it overnight”.

He claimed he was already making progress on the issue — although numbers are not actually coming down — and that his “conversations with President [Emmanuel] Macron enabled us to conclude a new deal with the French”You can try to solve the problem.

The previous deals which saw the British taxpayer being ripped off for millions to force France to stop Britain from using their country as a launchpad, like this current deal, failed to lower the numbers. And the government is refusing to comment on whether or not it believes that the latest will.

Sunak maintained that his government could be effective as long as people believe he’s trying to tackle illegals. “unapologetic about wanting to deliver an immigration system that’s competitive” — code for a system that gives bosses all the cheap labour they want, without the inconvenience of having to upskill the native workforce or offer better pay and conditions to attract and retain employees.