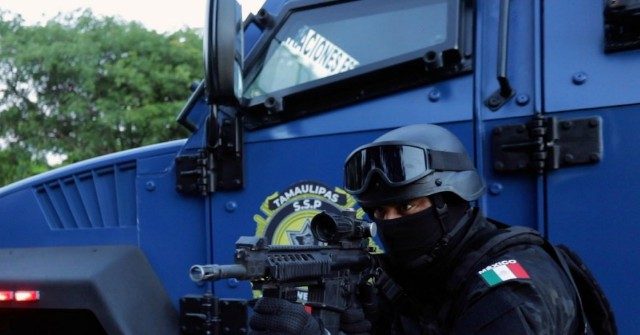 After 11 months of relative peace, the core factions of the Gulf Cartel appear to have resumed their longstanding turf war. The power struggle has already led to two large-scale shootouts between police and gunmen in the border city of Reynosa.

Tensions returned over the weekend when word began to spread that the Matamoros and Reynosa factions were fighting, Tamaulipas law enforcement sources revealed to Breitbart Texas. The cause for the new rift remains unknown.

Soon after, convoys of gunmen in Reynosa took to the streets to patrol the eastern and southern sides of the city.

The convoys from the Reynosa faction or “Metros” included makeshift armored vehicles with “X” painted on the windows. In a similar fashion, the Matamoros faction or “Ciclones” show painted triangles on their windows.

The violence ignited Sunday afternoon when police began encountering cartel convoys. The gunmen reportedly attacked the police using ambush tactics. The attacks took place on the western side of the city near the highway to Monterrey. The smaller clashes intensified into large-scale shootouts involving police helicopters.

So far, three police officers have sustained injuries from the attacks.

Law enforcement sources revealed to Breitbart Texas that neither faction of the Gulf Cartel has directly clashed with the other. The only violence between them so far has been targeted kidnappings and stash house raids on the eastern side of Reynosa.

Editor’s Note: Breitbart Texas traveled to Mexico City and the states of Tamaulipas, Coahuila, and Nuevo León to recruit citizen journalists willing to risk their lives and expose the cartels silencing their communities.  The writers would face certain death at the hands of the various cartels that operate in those areas including the Gulf Cartel and Los Zetas if a pseudonym were not used. Breitbart Texas’ Cartel Chronicles are published in both English and in their original Spanish. This article was written by “J.C. Sanchez” from Tamaulipas.