McCarthy the GOP leader raises his ante – He declares that he will remove top Dems Swalwell and Schiff after vowing to boot Ilhan Omar. 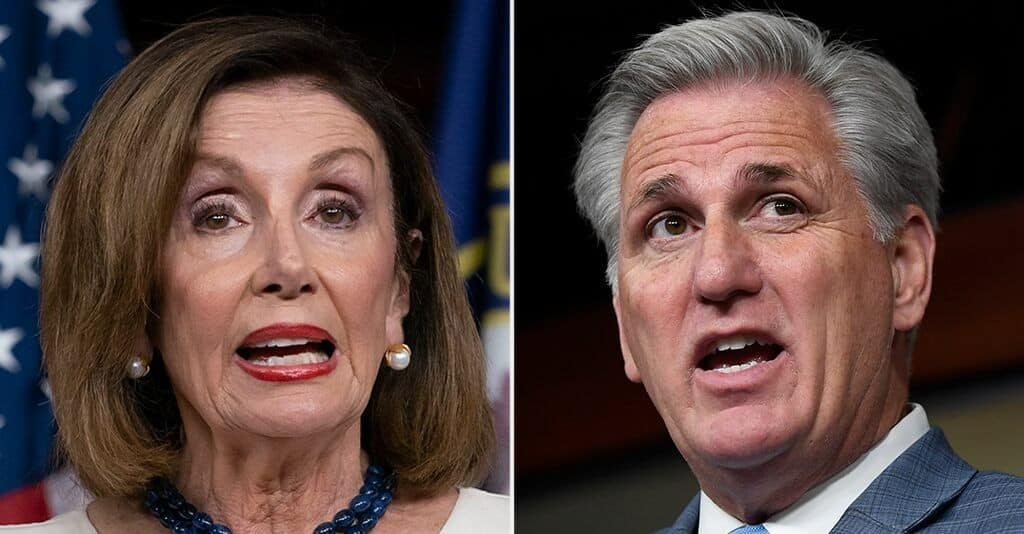 Kevin McCarthy, House Republican Leader, stated that, if elected Speaker of the House, he would remove Democratic Reps. Adam Schiff and Eric Swalwell from Congress for their past behavior.

McCarthy discussed the possibility of Republicans regaining control over the U.S. House during a Fox News interview with Maria Bartiromo. McCarthy appears to be in line to become the speaker and he has promised to honor his pledge to kick the three unpopular Democrats.

“Congressman, let me ask you about your decisions should you become the speaker of the House in January. What are you going to do in terms of these Democrats that you have on such important committees? You’ve talked in the past about removing I’ll hand to or mar, about Ilhan Omar, you’ve talked about removing Adam Schiff, about Eric Swalwell. Will you deliver?” Bartiromo asked McCarthy.

“Yes, I will. I’ll keep that promise. And one thing I’ve said from the very beginning, Eric Swalwell cannot get a security clearance in the public sector. Why would we ever give him a security clearance in the secrets of America? So I will not allow him to be on Intel. You have Adam Schiff who had lied to the American public time and again. We will not allow him to be on the Intel Committee either. Look, Congresswoman Omar, her anti-Semitic comments that have gone forward, we’re not going to allow her to be on Foreign Affairs. But we’re also going to stand up to what’s happening not just in the halls of Congress, but what’s happening to our higher education institutions, the anti-Semitism that’s going on on these campuses and others. We’ll investigate that as well and stop this to make sure that America does have the freedoms that we said we would keep and we would stand up to it as we move forward,” McCarthy declared.

McCarthy stated that Omar would be removed from the House Foreign Affairs Committee because of past incidents. “antisemitic” remarks.

“We watch antisemitism grow, not just on our campuses, but we watched it grow In the halls of Congress,” he told the Republican Jewish Coalition’s 2022 leadership meeting in Las Vegas.

“I promised you last year that as Speaker, she will no longer be on Foreign Affairs, and I’m keeping that promise,”As the cheers of the audience erupted, he continued.

Based on Ilhan Omar’s repeated anti-semitic remarks and anti-American comments, I made a promise to the House Foreign Affairs Committee that I would remove her from office when I become Speaker.

That promise I will keep. pic.twitter.com/04blBx3neD

McCarthy is the top candidate for the Speakership, but he can’t afford to lose many votes due to the party’s slim majority.

Since being elected to Congress in 2018, Omar has made several controversial comments widely deemed to perpetuate antisemitic tropes, including saying it was “all about the Benjamins” for the American Israel Public Affairs Committee and tweeting, “We have seen unthinkable atrocities committed by the U.S., Hamas, Israel, Afghanistan, and the Taliban,”This could be interpreted to mean that Israel and America were being equated with the Taliban.

Omar tweeted that Israel was the only country he had ever visited before joining Congress. “hypnotized the world.”Following her election, she presented a resolution to Congress that said boycotting Israel was likened to banning the Nazi regime of 1930s Germany.

McCarthy condemned Rep. Majorie Tay Greene (R.Ga.) after her statement last year. “Vaccinated employees get a vaccination logo just like the Nazi’s forced Jewish people to wear a gold star.”McCarthy said that McCarthy’s remarks were meant to minimize the Holocaust.

Democrats who were the majority voted at the time to take Greene out of her assignments in committee. McCarthy promised to reinstate Greene in those committee assignments. She has also pledged support for him to become Speaker.

Omar was criticised for complaining that a group Christian choir broke into song during a commercial flight in April.