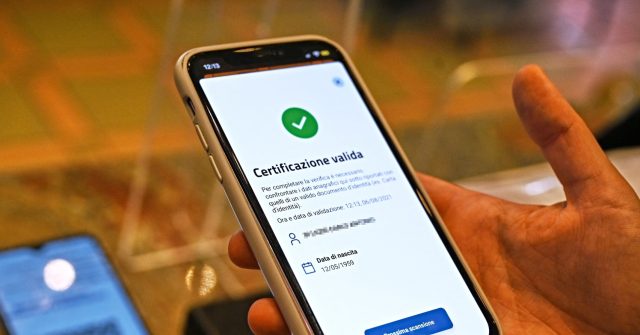 Officials from the European Union’s Civil Liberties committee have voted to approve the extension of the bloc’s usage of its transnational COVID certificate until 2023.

Although public discourse has largely moved on to the issues of the Ukraine war and the ongoing cost of living crisis, the EU is still seemingly quite concerned about the COVID-19 virus, with the bloc’s Civil Liberties committee voting on Thursday to extend its transnational COVID certificate’s usage for another 12 months.

It comes as officials from nations across the union start to make noises once again about rising COVID case numbers, with Germany’s now-infamous lockdown-loving health minister once again recommending that people wear face coverings indoors.

In a press release published on the EU’s official website on Thursday, the bloc announced that the Civil Liberties committee had voted 51-11 in favour of keeping the system of COVID certificates active under the justification that the pass system would still be in place “in case it is needed”.

Meanwhile, those who have received a booster jab against the virus are entitled to a version of the pass that — as of writing — does not expire, but this could be subject to change.

The move to extend the pass system must now be approved by the EU parliament at a plenary session in Brussels, with a vote set to take place on June 23.

The one-year extension of the passes comes as ministers from nations across Europe begin hinting again that the spread of COVID-19 may once again be considered a problem that may need to be addressed via lockdown restrictions.

“[The] Number of people in hospital who are positive for CoVid has risen above 300. ICU cases rising too,” wrote Ireland’s Deputy PM, Leo Varadkar, on social media last week.

“Could be a blip. Could be start of a summer wave,” he continued. “Immunity is waning though for sure. Please get your booster if you haven’t.”

Number of people in hospital who are positive for CoVid has risen above 300. ICU cases rising too. Could be a blip. Could be start of a summer wave. Immunity is waning though for sure. Please get your booster if you haven’t. pic.twitter.com/NkzX7VoRo5

“A summer wave was to be expected,” the minister said. “Wearing masks indoors voluntarily and a 4th vaccination are the best antidotes.”

“The fourth vaccination protects against serious illness and reduces the risk of infection for a few months, albeit incompletely,” he continued. “Now that helps a lot.”

The minister has also — interestingly enough — began pushing for more research to be done into potential unintended side-effects of COVID-19 vaccines, arguing that — while he still is pushing for people to get jabbed — discussions of unintended consequences should not be ignored.

“Post-vac syndrome needs better investigation. We recommend vaccination against COVID and against post-COVID. The benefit outweighs the risk in any age group,” he said in a social media post that linked to an article by Der Spiegel discussing “inexplicable symptoms” experienced by some who took the jab.

“Despite this, post-vac is not a taboo subject and needs to be researched and addressed,” he went on to say.