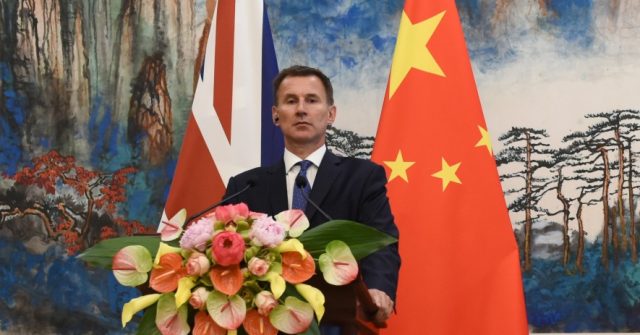 Culture Secretary Nadine Dorries has claimed that Jeremy Hunt, Britain’s longest-serving Health Secretary, wanted a China-style regime in which people testing positive for Covid would be taken from their homes and confined in “isolation hotels”.

Dorries and Hunt were sparring ahead of the confidence vote among Conservative (Tory) Members of Parliament (MPs) on Boris Johnson’s leadership of their party, with Hunt having publicly called for Johnson’s ouster.

“Having been trusted with power, Conservative MPs know in our hearts we are not giving the British people the leadership they deserve,” asserted Hunt, Health Secretary from 2012 to 2018, Foreign Secretary from 2018 to 2019, and now a backbencher believed to be a likely challenger for the Tory leadership, in a series of social media posts.

“[B]ecause we are no longer trusted by the electorate… we are set to lose the next general election,” he went on, concluding with a Barack Obama-style plea that “[t]oday’s decision is change or lose [the next election]” and “I will be voting for change”.

This prompted Dorries, a serving member of Johnson’s Cabinet, to reveal some home truths about the Remainer, responding directly to his online call for action by accusing him of having pushed for an even more draconian lockdown regime than the one Johnson subjected the country to.

“On [the] afternoon of 23rd July 2020 when I was health minister you telephoned me to tell me that we had to handle the pandemic following the example set by the East/China. That people testing [positive] should be removed from their homes and placed into isolation hotels for two weeks,” she alleged.

“You said y[ou]r wife’s family had experience of this during SARS. I said that British people would never tolerate being removed from their homes and loved ones at which point you demanded I show you the evidence for that,” she went on, declaring that his leadership during the pandemic “would have been a disaster.”

1/4 On afternoon of 23rd July 2020 when I was health minister you telephoned me to tell me that we had to handle the pandemic following the example set by the East/China. That people testing + should be removed from their homes and placed into isolation hotels for two weeks. https://t.co/iABbYOH6xR

Dorries also observed that, once the coronavirus was at large in the country, Hunt’s preparations for a pandemic during his long tenure as Health Secretary proved “wanting and inadequate” and accused him of “duplicity… in destabilising the party and country to serve [his] own personal ambition”.

“You told others that [Prime Minister] and Gov[ernemt] would swiftly collapse on back of Brexit and you would swoop in,” she continued, going on to claim Hunt had told her as much himself following the general election.

“If you had been leader you’d have handed the keys of [10 Downing Street] to [former Labour leader Jeremy] Corbyn,” she concluded.

“You’ve been wrong about almost everything, you are wrong again now”.