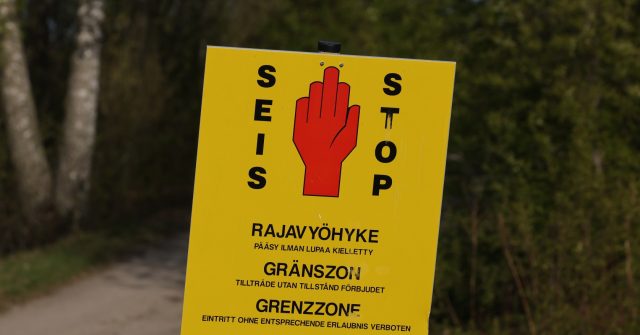 The Finnish government is developing various legislative policies and amendments to be able to handle a possible surge of illegal immigrants and close the border with Russia while suspending asylum applications.

The Finnish Parliament’s Administrative Committee is looking to make changes to the Emergency Powers Act and the Border Guard Act in order to better prepare the country for a possible surge of illegal crossing attempts if Russia sends illegals to the border and engages in the so-called “hybrid warfare” used by Belarus against Poland last year.

The new rules would allow the government to completely close the border and suspend all asylum applications, leaving just Helskini’s main airport as the only point migrants would be able to apply for asylum, broadcaster Yle reports.

Riikka Purra, chairman of the Administrative Committee, commented on the new policies saying it was vital in an emergency that asylum applications were not being processed at the border with a foreign neighbour engaging in hybrid warfare policies.

“The Conservative Party is pleased that, if necessary, if Finland is subjected to a hybrid operation in which migrants are used as a human weapon against Finns, the entire eastern border can be closed,” Heikki Vestman, a member of the Administrative Committee, added.

The changes will also be debated in the Finnish parliament and Riikka Purra stated that the matter would likely be hotly contested among the various political parties.

Since Finland announced its intentions toward applying to join the NATO alliance, many have speculated what Russia may do in retaliation for the country giving up its prior neutral status.

Charly Salonius-Pasternak, a senior researcher at the Finnish Institute of International Affairs, warned in April, prior to Finland’s application to join NATO, that Russia may attempt to flood Finland with illegal immigrants saying, “It could be diplomatic counterattacks, cyberattacks or, for example, the exploitation of large numbers of asylum seekers as a kind of hybrid threat.”

Finland has been mulling border security issues since last year, however, but some have claimed the country would find it extremely difficult to seal the entire land border with Russia.

Mikko Lehmus, the head of the Situation and Risk Analysis Centre of the Border Guard, stated last November that building border barriers along the entire border with Russia was not feasible.

“[A]ttention is focused on Finland’s long eastern border. It must be clear to everyone that it cannot be comprehensively fenced or covered by other obstacle devices,” he said.