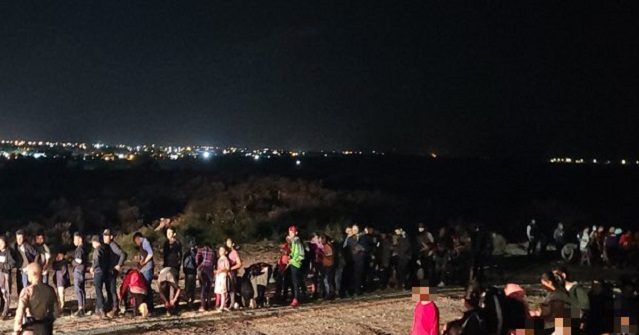 Border Patrol agents in the five Texas-based sectors apprehended nearly 138,000 migrants in May, according to a source within U.S. Customs and Border Protection. This is up by approximately 10,000 over the previous month. If the migrants apprehended in the Texas-based sectors were put into a brand new city, it would be the 25th largest city in Texas by population — greater than Waco.

Once again, the Rio Grande Valley Sector led the way as the busiest sector in the country for migrant apprehensions with slightly over 45,000 migrants. The Del Rio Sector came in as a close second with more than 44,000 apprehensions. The El Paso, Laredo, and Big Bend Sectors rounded out the five Texas-based sectors with approximately 34,000, 11,500, and 2,800 apprehensions respectively.

During the Memorial Day weekend, Del Rio Sector Chief Patrol Agent Jason D. Owens reported that his agents apprehended nearly 4,000 of the sector’s May total of 44,000. He also reported 1,600 more migrants got away without being apprehended, Breitbart Texas reported.

Following the record April apprehensions, CBP Commissioner Chris Magnus stated, “The fact is that our borders are not open, and we will continue to remove those who enter our country unlawfully and have no legal basis to stay.”

“After many months of planning, we are executing a comprehensive strategy to safely, orderly, and humanely manage our borders,” Magnus added.

In reality, the southwest border with Mexico is anything but safe, orderly, and humane as nearly two dozen migrants drowned in the Del Rio Border Patrol in April. Video reports from Eagle Pass and the Rio Grande Valley continue to show migrants crossing at will. Other reports show the inhumane and life-threatening circumstances that take place in human smuggling operations along the border.