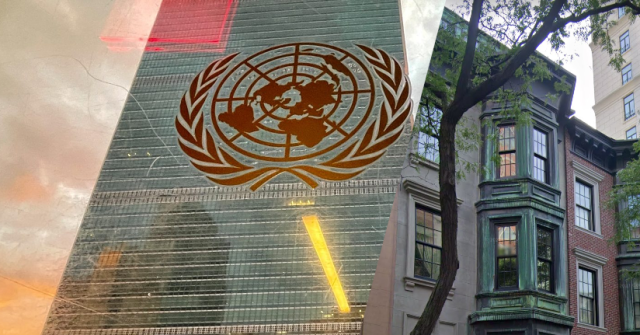 The European Union is looking to drop upwards of $18 million on a massive 5,300-square-foot New York residence for the bloc’s ambassador to the United Nations.

According to documents seen by Breitbart Europe, the European Union’s External Action Service — in other words the foreign ministry — is looking to buy a massive New York townhouse for the bloc’s ambassador to the U.N., with the initial purchase price alone set to put the union’s taxpayers back $18 million. The document follows the EU’s tender for such a property, published in 2021.

Officials looking to gain approval for the purchase have attempted to justify the purchase with reference to COVID lockdown measures that had been place in New York, saying that the large building would allow the ambassador to host formal and informal gatherings.

However, an MEP speaking to Breitbart Europe slammed the suggested purchase, especially in relation to the use of American COVID restrictions to justify the measure, and has vowed to resist the purchase request.

Located on 138 East 65th Street, New York, the 543 square meter townhouse built in 1899 consists of five bedrooms, eight bathrooms, two gardens, one terrace, a “wet bar”, a “media room”, along with a host of other facilities for both public and private use.

The property also comes with underground parking, as well as what are described in the EU document as “high-end finishes throughout”, with a public property listing for the building noting the inclusion of a “leather clad commercial elevator”, as well as a “leather-wrapped handrail” for the stairs.

Such luxury does not come cheap, with the bloc looking to initially pay up to $18 million for the property itself should the purchase be approved.

On top of this steep price tag, a so-called New York “mansion tax” to the tune of $630,000 may also need to be paid, though officials claim that this latter tax may end up being waved by the U.S. Department of State.

“The proposed purchase meets the required standards for image, functionality and representativeness, allowing the Head of Delegation host formal and informal meetings and events in the Residence; a great deal of business takes place during social events in the UN diplomatic community,” the document requesting for the EU Budgetary Authority to clear the purchase argues.

“The outdoor space will also enhance the hosting capacity of the Residence, while respecting US health and safety guidelines in the context of the COVID-19 pandemic (at least 50 guests outside and 55 inside for standing receptions and 14 persons for seated dinners) (sic),” the document goes on to say.

However, while some officials within the EU seem to be backing the purchase, the budget spokesman for the populist Alternative für Deutschland party’s delegation in the EU Parliament, Joachim Kuhs MEP, vowed to resist the purchase when it comes in front of the EU’s Committee on Budgets later this month

“I am against it!” Kuhs told Breitbart Europe, saying that his party believed in a “Europe of nations and fatherlands that… work together economically, but can still act freely and independently” and as such would rather the EU not have such representation in New York.

However, he also criticised attempts to justify the purchase via reference to COVID restrictions in the U.S., highlighting what he saw as a double standard within the bloc.

“…the EU justifies this real estate deal with the draconian Covid restrictions in New York. Exactly from the same EU that robs its citizens of their freedom themselves with the EU Covid certificate, sprawling mRNA vaccine purchases and increasing seizure of power,” the EU parliamentarian also said.

“It’s a good thing that the EU at least has a double standard in this regard, otherwise it would have no standards at all,” Kuhs concluded.