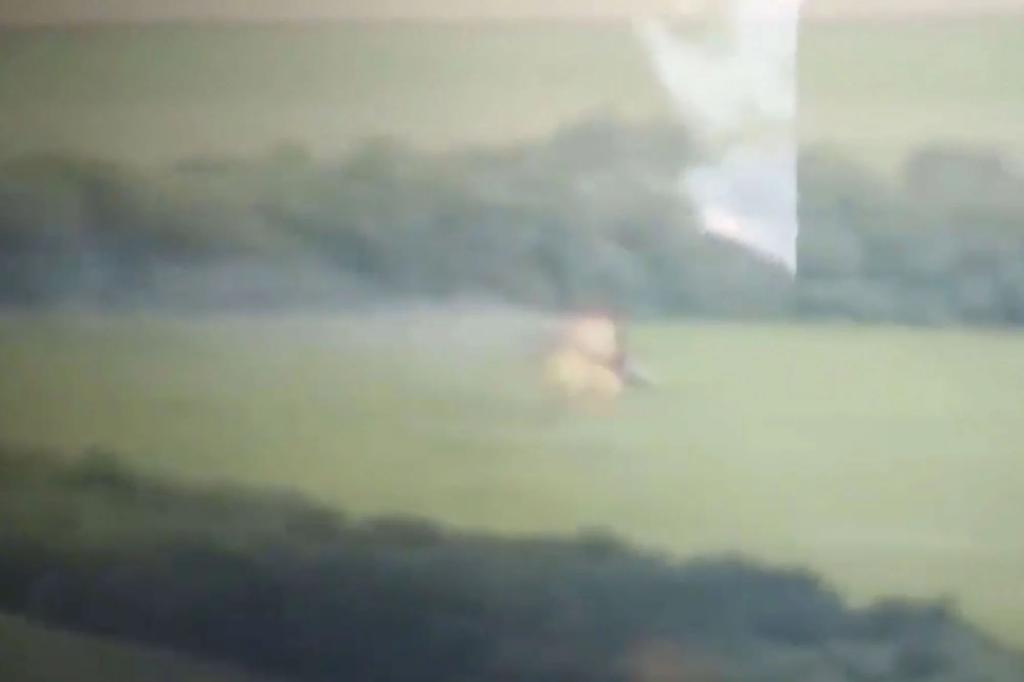 Chilling footage captures the moment a missile hits a low-flying Russian helicopter before crashing into a field in Ukraine in a blazing inferno.

The Russian aircraft, reportedly a Mi-35M attack helicopter, was shot down while flying extremely close to the ground by a MANPADS (man-portable air defense system).

In the short clip, which was shared widely on social media, the chopper can be seen hugging the ground as it flies over fields in southern Ukraine.

Suddenly, it bursts into flames after apparently being struck in the engine exhaust area at the base of the main rotor by a missile.

Footage believed to have been filmed from a drone shows the aircraft spinning before crashing to the ground.

The helicopter explodes in an enormous fireball, sending flames and thick black smoke pouring into the sky.

Debris or possibly crew members can be seen falling from the aircraft after the missile strikes it.

Pictures from the crash scene show the fiery wreckage of the helicopter.

Ukraine’s Azov SSO battalion claimed responsibility for shooting down the helicopter, which it claimed was a Russian Mi-24, although elsewhere it has been reported as a Mi-35M.

It also said the helicopter was struck in the Zaporizhzhia region just east of Kherson.

The video was geolocated to an area just inside the pro-Russian separatist region of Donetsk on the border with Zaporizhzhia.

Posting on the messaging app Telegram, the Azov SSO said: “Original footage of the Russian Mi-24 helicopter in the Zaporizhzhia region.

“Aimed shot by a missile from the Stinger MANPADS was fired by an SSO Avoz fighter under the pseudonym Betsyk.

“The burning helicopter of the occupiers made an ‘unplanned’ landing right in the middle of the Ukrainian field.

“Now it is his permanent location.”