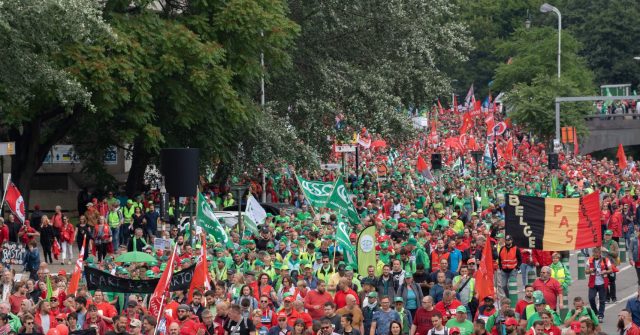 On Monday, around 70,000 protestors against inflation took to the streets in Belgium as a result of a national strike that crippled Belgium’s transport infrastructure.

A national strike was launched in Belgium by trade unions to protest rampant inflation and the continuing cost of living.

Monday’s industrial actions in Belgium preceded events due to take place across Europe, with the UK experiencing massive rail and subway strikes on Tuesday.

A report from The Brussels Times, Monday’s strikes have had seriously damaging effects on transport in the country, with the capital’s main airport going so far as to cancel every single one of its 232 outgoing flights due to a lack of staff.

In the meantime, protestors marched through the capital of Belgium to demonstrate their dismay at ongoing hardship. While police stated that about 70,000 were present, the event organizers said it was more like 80,000.

“The workers are dying! We can’t take it anymore!” one demonstrator told La Libre BelgiqueOne person said, “The”, while the other stated that “peanuts”Not enough was being given by government to tide over people struggling to cope with current crises.

Other strikes in the aviation industry are scheduled for later this week.

These demonstrations are similar to many others expected to occur in Europe. Many people on the continent struggle just to get by.

The London Underground workers were also expected to join the industrial action in an attempt to get a raise.

Ministers from the government have blamed union officials. One even suggested that certain organisations were bribing protestors.

Bigwigs at the centre of the strike however have insisted that government is to blame for the forthcoming strikes, with Mick Lynch of the Rail, Maritime and Transport union claiming that the Conservative party have prevented a deal from being done.

Teachers and medical workers within Britain’s socialised healthcare system have now hinted that they may take similar action if their pay packets are not padded to meet the increased strain caused by inflation.

“The mood among teachers has changed,” said the head of one teachers’ union. “Last year the issue was mainly workload. This year it is workload and pay.”

The union representative went on to say that if there was not a significant improvement on the 3 per cent pay hike offer presented by the government’s education secretary, the organisation would move to poll its members on whether or not to take industrial action.