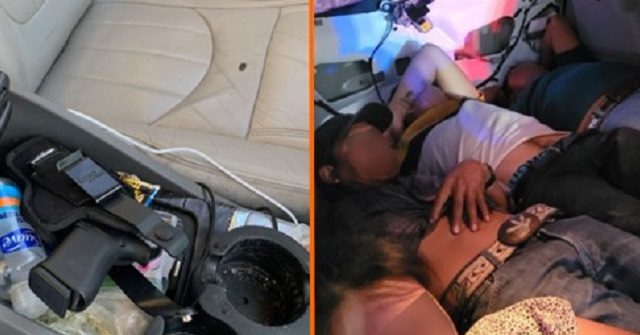 After a stop at the Mexican border, Tucson Sector Border Patrol officers arrested an armed human trafficker. He is now facing federal charges for the alleged smuggling and transport of six migrants.

Tucson Station Border Patrol officers conducted an inspection of a Buick Enclave, a white Buick Enclave, near Three Points in Arizona, earlier this week. The agents discovered six immigrants inside the Buick Enclave and concluded that they were not legal residents of the United States.

After a Tucson Station agent arrested him, he was charged with criminal offenses. #HumanSmuggling.

Three Points, Arizona was where the U.S. citizen had been stopped. The agent found six illegally smuggled Mexican citizens inside the car. After the arrest, an loaded firearm was taken. pic.twitter.com/sSryip7b9p

John R. Modlin (Tucson Sector Chief Patrol Agent) tweeted photographs from the vehicle to show the migrants hiding in the SUV. The agents discovered a Glock 9mm loaded pistol between the seats in the console.

Agents identified six of the migrants as Mexican citizens.

Agents then detained the driver who was a U.S. citizen and now faces federal felonies for human smuggling. The agents also identified the accused smuggler to be a felon. Accordingly, the alleged smuggler might face charges related to felon in possession a handgun.

Agents from Ajo Station also detained an armed drug smuggler who had more than 120 pounds methamphetamine inside their SUV. It was near Gila Bend, Arizona. Agents said that the suspect was carrying four children with him in his vehicle, which contained dangerous drugs.

“When a Border Patrol Canine conducted a free air search of the vehicle it alerted to the presence of concealed people or narcotics. A search of the rear of the vehicle, a spare tire, and a suitcase revealed over 120 pounds of white crystal-like substance wrapped in 158 plastic packages which tested positive for methamphetamine,”Border Patrol officers reported. “Also, in the vehicle agents located $635 and a Smith & Wesson 9 mm pistol, two magazines, and 19 rounds of ammunition.”

Agents detained the driver and placed the four minor children under seven in protective custody. The children were later taken into protective custody by a family member. The agents turned over the drug, firearm, and vehicle to the Maricopa County Drug Suppression Task Force.

On the following day Chief Modlin posted two photographs of an agent of Border Patrol carrying a wounded immigrant out of wilderness. An information call from 911 regarding an injured woman migrant in remote Arivaca, Arizona provided the agents with valuable information.

Tucson Sector agents are willing to do anything necessary for a job well done. #rescue!

A remote location outside Arivaca was called by 911 dispatchers. They located a Guatemalan citizen who had been injured. The woman was carried over mountains to an ambulance. #HonorFirst pic.twitter.com/XOIEpnPDaB

Agents located the woman, who was identified as an illegally present Guatemalan citizen in the U.S.

“She was selflessly carried through mountainous terrain to an awaiting ambulance,”Modlin declared.