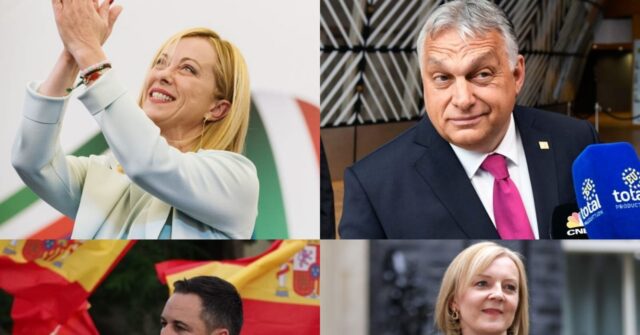 The apparent victory of the Giorgia Meloni, Matteo Salvini, and Silvio Berlusconi coalition in Italy’s election may mark a new high point for the broader right in Europe, which has been in a back and forth battle with the left-liberal establishment across the continent since 2016.

Meloni, of the national conservative Brothers of Italy (FdI), secured less than five per cent of the vote in 2018, but now leads the largest party in her country and appears set to become its first female prime minister, backed by Matteo Salvini’s League (Lega) and elder statesman Silvio Berlusconi’s Forza Italia.

Social conservative unabashedly anti-mass migration who has owed at least part of her popularity surge to refusing to support the old technocratic government as most other major parties in the country. She criticized its impositions of punishments restrictions and mandates for the unvaccinated “state blackmail”, Meloni’s election could truly overturn the established order in the European Union — more perhaps than even Brexit in 2016.

The British people voted to Leave the European Union in 2016 — against the strongly stated insistence of every major political party in Great Britain, the establishment press, the European Union, Barrack Obama, and many others. This deprived the bloc of one of its biggest budget contributors, yet the British government had never posed much opposition to the bloc’s real agenda from the inside while it could.

The Conservative (Tory) Party, which has been in office since 2010, has often noisily opposed the EU’s steady erosion of national sovereignty, but always ultimately accepted power-grabbing European treaties such as Lisbon, and was evidently untroubled by the fact that in 72 attempts at voting against EU-level measures at the European Council over a 20-year period, British governments were defeated 72 times.

Indeed, even with Boris Johnson having delivered a half-Brexit, leaving Brussels with a great deal of control over Northern Ireland and continued access to Britain’s fisheries, among other concessions, the “hard right”The leftist press deplored that post-Brexit governments failed to challenge established order international and continued following the net zero, mass migration, social justice playbook home.

Ironically, the post-communist EU member states of Central Europe have been able to achieve more domestic reform and resistance against the EU than any other country.

Liz Truss Vows to ‘Ride Out the Storm’ of Cost of Living Crisis, Makes No Mention of Illegal Migration in First Address to Nationhttps://t.co/942ygjW3az

Although the European Union helped to rescue Central European countries from post-Soviet Depression, it is clear that this support came at a high political price. The ever closer union and eventual federalization saw Britain call it quits in 2016. Hungary and Poland’s recent history as satellites of a massive political empire — the very same Soviet Union — has made countries like them more sensitive than most to Brussels’ rule from the centre approach.

Although their governments may come under fire from abroad because they enacted policies that are not popular in Washington and Brussels, at the very least, they have kept their campaign promises. That is rare in any democracy. This has seen these national-conservative parties — and pay attention, right-wing leaders everywhere — re-elected time and time again, and often with great majorities.

Cause and Effect: Poland Completes 87 Miles of Border Wall, Announces End of State of Emergencyhttps://t.co/j3ifYImlxP

While the nations they lead may be relatively small, or not in the first flush of global prominence, in terms of effective conservative leadership and electoral success there can’t be many better examples. In contrast to the United States or the United Kingdom, for instance, which flounder persistently on border control and how to enact it, Poland realised it needed a border wall last year and then built one. It was that easy.

It isn’t like this was a novel idea: Hungary went through the same process back in 2015 as the Europe migrant crisis was kicking into gear: a brief process of identifying an emerging problem, deploying an immediate and effective solution — slashing illegal immigration by 99 per cent at a stroke — and then enjoying a polling bump from voters satisfied the government is capable of doing what it says.

Central European conservatives lead in family policy. This is because they understand that the family is fundamental to any healthy, functioning society. It is also an area that allows families to flourish. Mass migration is not an option if there is ever a desire to increase the population. Poland and Hungary both have family support that allows couples to have as many kids as they like.

Among these support packages in Poland are generous government monthly child care payments, a special boosted state pension for mothers who elect to raise a family rather than work, and even making subtle changes in the law to help families spend more time together. It’s happening in Hungary too, with higher rates of child support for larger families, subsidies for larger family-carrying cars for those who need them, and enhanced housing benefit.

Family loans are one of Hungary’s most extreme programs. This is a large pay-out (about $35,000) given to women who marry for the first-time. For every child born, the government will write off one-third.

Hungary: We Will Make Our Country Family Friendly So Population Can Grow Without Mass Migration https://t.co/LOeeaMucNl

The effects of these measures already have been observed to affect birth rates.

However, there are other problems. While Hungary has been radical in reforming tax, with a low, flat rate of 16 per cent introduced in 2012, Poland has lagged in this area, charging double that on incomes over $17,000.

It is also possible to engage in questionable ways on the global stage. While Hungary’s energy policy — that it doesn’t matter where it comes from, as long as it’s cheap — is absolutely no different to the one pursued by Germany for decades, it sticking with low-cost, bountiful, but politically tainted Russian gas in the Ukraine war era is questionable. Similar concerns are shared by conservatives abroad over Hungary’s willingness to take money from China, a state of affairs doubtless accelerated by other more natural sources of funding like Brussels and Washington being reticent.

Many right-leaning Hungarians are cautious about Beijing and the scandal over Budapest’s 2021 university money has made them wary of the direction Hungary is heading.

The West is the Rest

2017 saw the rise of national conservative parties and populist parties in Western Europe, which were facing social unrest due to mass migration and multiculturalism.

However, Marine Le Pen in France, the Freedom Party in the Netherlands, the Sweden Democrats in Sweden, Alternative for Germany (AfD) in Germany, all appeared to stall out — indeed, in Germany to conservative-in-name-only Angela Merkel-led government has now been replaced by an openly left-liberal coalition — appearing to either hit a ceiling or making only minimal gains since the halcyon days of Brexit and Trump.

It is true that the Sweden Democrats, at least, managed to make gains in the recent Swedish elections — but they have done so by making significant concessions, particularly on the EU and national sovereignty, and will be in hock to so-called “centre-right”Parties unlikely to grant them any real influence if they are part of a coalition with right-leaning groups in that troubled country.

One country does look like it may be on the cusp of an Italy-style conservative revolution, however, with the VOX party of Santiago Abascal having surged from less than 1 per cent of the vote in 2016 to polling as the second most popular party in the country and influence or participation in a number of regional governments — a Meloni-like rise.