30 Migrants in Camouflage Found Hiding near Border in Texas 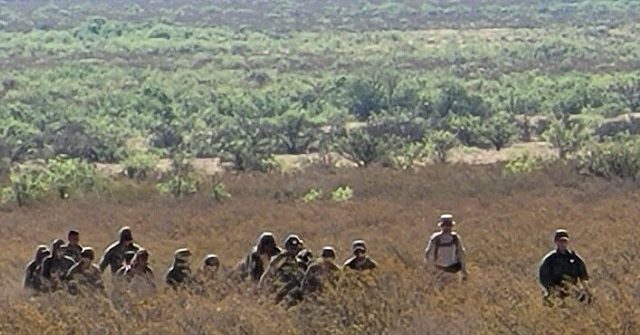 Big Bend Sector Border Patrol agents tracked down 30 migrants attempting to make their way into the U.S. interior. They wore camouflage and were hiding in brush near Van Horn, Texas.

themselves in the brush. Subjects were transported to the station for processing. The group consisted of Mexican, Guatemalan, Ecuadorian, and Honduran nationals. #USBP #CBPAMO

The agents observed foot signs following the sensor alert and began tracking the group of migrants. This led the agents to the area south of Van Horn where they apprehended the group who attempted to conceal themselves in the brush.

The agents arrested the group of 30 migrants and identified them as citizens of Ecuador, Guatemala, Honduras, and Mexico. All were illegally present in the United States, McGoffin tweeted.

Last week, Big Bend Sector agents found a Pakistani man attempting to sneak into the U.S. The agents found the man hiding in the brush near the Presidio port of entry, Breitbart Texas reported.

With the help of surveillance technology Agents assigned to the Presidio Border Patrol Station apprehended one adult male attempting to conceal himself in the brush near the Presidio Port of Entry. pic.twitter.com/wans9RlsuK

During the month of May, Big Bend Sector Border Patrol agents apprehended nearly 3,000 migrants, according to a source operating under the umbrella of U.S. Customs and Border Protection. This was part of the nearly 220,000 migrants apprehended in May, the unofficial report reviewed by Breitbart Texas revealed.