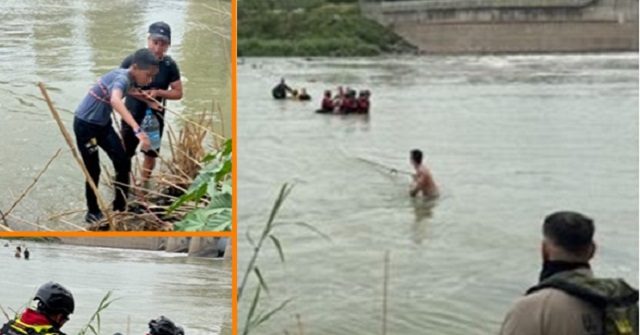 McAllen Station Border Patrol agents patrolling the Rio Grande near Mission, Texas, on the afternoon of June 13 observed a group of migrants crossing from Mexico, according to information provided by Rio Grande Valley Sector Border Patrol officials. The agents observed the raft deflating during the crossing.

The agents assisted the migrants in making their way safely to the U.S. side of the Rio Grande. After taking 10 migrants into custody, the agents identified them as citizens of El Salvador, Guatemala, and Mexico, officials stated.

Earlier that afternoon, McAllen Station agents carried out another rescue operation when they witnessed eight migrants attempting to cross the Rio Grande near the Anzalduas Dam. The migrants were struggling to stay afloat during the illegal border crossing attempt.

Agents assisted the migrants by getting several ropes to them. The migrants used the ropes to make their way across the swiftly moving currents of the border river. An emergency crew from the Mission Fire Department also assisted in the rescue and recovery operation.

Officials medically screened the eight migrants before Border Patrol agents transported them to the Centralized Processing Center for further evaluation and processing. Officials identified the migrants as citizens of Cuba. All were illegally present in the United States.

Rio Grande Valley Sector agents led the way in May as the busiest sector in the country for migrant apprehensions with slightly over 45,000 migrants. This was part of the nearly 138,000 apprehended in May in the five Texas-based Border Patrol sectors, Breitbart Texas reported.