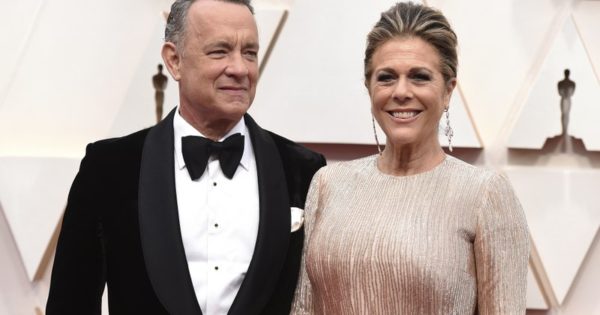 Famed actor Tom Hanks was speaking in Australia to promote his movie Elvis, a biopic directed by Australia’s own Baz Luhrmann.

While speaking, Hanks’ hand was seen shaking — driving speculation that the A-list actor was unwell.

In a video obtained by the Daily Mail, Hanks awkwardly tried to switch hands on the microphone.

“I’ve shot films in Morocco and Los Angeles and New York City and Seattle and in Berlin. None of them have what the Gold Coast have, and what is that? Two words. None of those other cities have Dan Murphy,” he said while shaking, referring to a chain of liquor stores called Dan Murphy’s. “What a man, who I got to know quite well.”

The audience applauded, without expressing any worries about Hanks.

Still, the Mail stoked fears about the 65-year-old actor’s health with the headline “EXCLUSIVE: Fears for Tom Hanks’ health as Hollywood megastar appears unable to control his shaking right hand while holding a microphone and speaking as he promotes Baz Luhrmann’s new Elvis movie.”

Doctors and fans have speculated about the cause of the actor’s shaking.

Without making a formal diagnosis, one doctor worried about Parkinson’s in a statement to the Mail.

“Parkinson’s would be uppermost in most physicians’ minds,” Dr. Stuart Fischer, creator of the Park Avenue Diet, told DailyMail.com, after watching the video. “This trembling hand can be an early sign of the disease. One would think he would be on the path to a neurologist’s office now if not already. It could be weeks, months, or years before it progresses. It could be like with the famous conductor James Levine, it did take many years for a leg tremor to evolve into a bodily manifestation.”

Fans joined the speculation on Twitter. One fan also suggested Parkinson’s in a tweet obtained by the Daily Mirror.

Other fans pointed to the actor’s struggle with Type 2 diabetes. Hanks announced his diagnosis on The Late Show with David Letterman in 2013.

“He’s diabetic. This happens to my mom when she gets low blood sugar,” one Twitter user wrote, according to the Mirror. The Twitter user failed to provide any evidence beyond that anecdote.

Other observers mentioned the actor’s recent weight loss. “Saw him on-screen recently and thought he looked very thin,” a third fan tweeted, according to the Mirror. Another reportedly said, “He does seem like he has aged all of a sudden – lost weight.”

In the past, Hanks has both gained and lost weight for roles in movies like Philadelphia, Cast Way, and A League of Their Own.

Some fans have expressed less sympathy. A few Twitter users have blamed the actor’s mild shaking on the COVID-19 vaccine. One user wrote, in Italian, “Anyone who has attempted suicide by getting vaccinated does not have my respect.”

Hanks, in his 60s, apparently COVID-19 in March 2020, during the early days of the pandemic. After that, he told NPR that he donated his blood to virus research.

Hanks has yet to announce any formal diagnosis. One Twitter user remarked, according to the Mirror, “God forbid it could just be adrenaline and nerves!” Another user said, “His health is his business.”