‘Go f–k yourself’: How a NY restaurateur survived his tangles with the mob 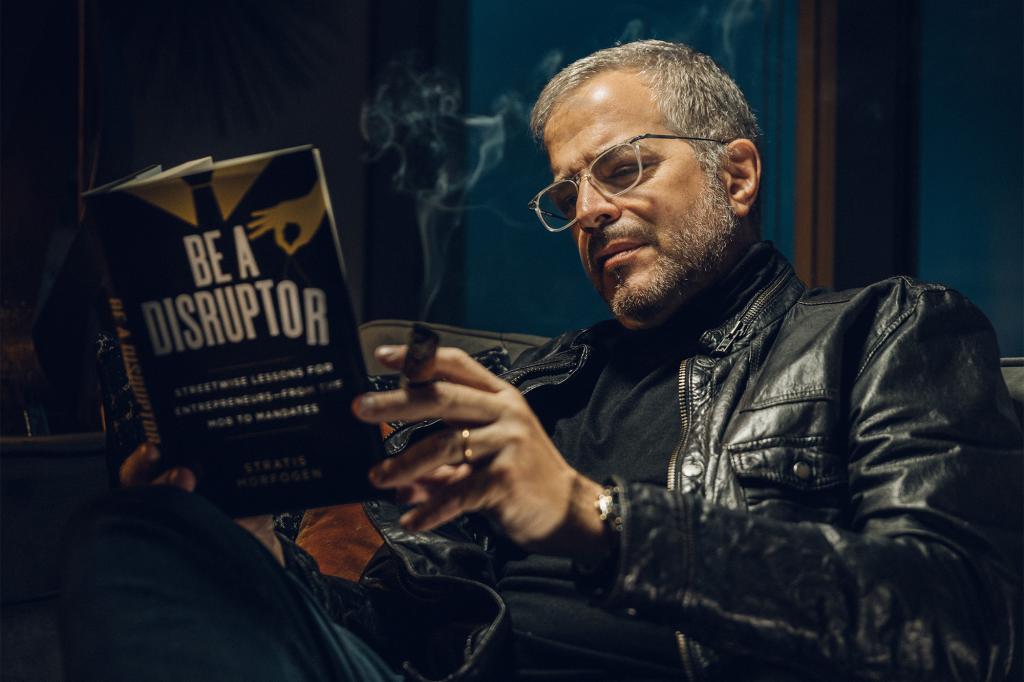 When Stratis Morfogen opened his first Manhattan diner in the 1990s, he had no intention of one day telling a member of John Gotti Jr.’s crew to “go f–k themselves.”

But for “The Golden Greek” — a nickname Morfogen earned from his mob contacts for his money-making ways — standing up to the mafia became a way of life as an NYC-based restaurateur. Now, the owner of Brooklyn Chop House in lower Manhattan is naming names in his new book, “Be a Disruptor: Streetwise Lessons for Entrepreneurs ― from the Mob to Mandates,” out Tuesday.

Morfogen opened Gotham City Diner on the Upper East Side in 1993. Soon after, the mob made their presence known.

“I had a head of promotions, his name was Noel Ashman … one night Noel comes in with a black eye, I said, ‘What’s going on?’” Morfogen told The Post in an exclusive interview.

“Some gangster said we have to pay them every month or they’re going to continuously start beating us up,” Morfogen recalled him saying. “[Ashman] pointed out some names to me and I recognized that these are Gambino guys.”

Morfogen wasn’t naive about the Cosa Nostra. He grew up on Long Island in the 1970s and his family had owned a Howard Beach restaurant where mob don Carlo Gambino was a regular. Gambino would slip the eager 6-year-old Morfogen $20 bills and ask him about school.

After he opened his own spot, Morfogen enjoyed frequent visits from the Genovese crime family’s Ralph Coppola and Bobby “Bucky” Carbone.

Underboss Coppola got so close that he called Morfogen “nephew,” and Carbone entertained him with tales from the other side. One night, Carbone even told him the story of the first man he killed, Morfogen said. It was at a bar, in a debt collection gone awry.

But Gotti Jr.’s crew was different.

Gambino died on Long Island in 1976 and John Gotti was behind bars thanks to testimony from Sammy “the Bull” Gravano. In his absence, his son, Gotti Jr., was running the show — and intimidating restaurateurs — in the 1990s.

“John Gotti, Jr. and his crew, that’s what they lived on. They would shake down every restaurant from the Upper East Side to Midtown,” Morfogen said.

As the new kid on the block, it was Morfogen’s turn to pony up. Or at least that’s what two of Gotti Jr.’s “top honchos” thought.

Soon after, someone started throwing black paint on the diner’s windows every night. Morfogen would scrub them down each morning.

Coppola noticed this was happening and told Morfogen to “sit tight.”

Two days later, Morfogen got a call from one of Coppola’s guys, telling him to come by the now-defunct restaurant Ferrier Bistro at 10 p.m.

“When I got there, Ralph was there with Bucky and all the Gambino capos were in the back, sitting … so I sat down with Ralph, Bobby and the five heads of the Gambino family,” he said.

“Ralph basically says, ‘Listen, this kid is with us and you tell [Gotti] Jr. to back off and if he doesn’t back off, this thing is gonna escalate.’

“And my head just spun … just like that, the guys turned around and said, ‘Hey, we like this kid, he’s a good kid. Don’t worry, we’ll talk to Jr. and we’ll squash this.’ And lo and behold, it was squashed.”

Just like that, Morfogen was under the protection of the Genovese boys. Carbone even put an ice pick into the thigh of an employee whom he believed stole $30,000 from the diner. He said they never asked for anything in return: “It was true friendship,” Morfogen said.

A friend of ours — and a new enemy

Things were fantastic. The club quickly became famous when New York Rangers captain Mark Messier brought in the Stanley Cup. One night, Morfogen accidentally turned away Madonna and Tupac at the door because he didn’t recognize them.

But it also caught the attention of a West Coast mafioso who wanted to “buy” his way into the nightlife.

A “Jewish gangster from LA” once sat Morfogen down inside his own club and tried making him an offer he couldn’t refuse.

“He takes out a pen, he writes on a napkin ‘$10K’ and then he pulls out a 9 millimeter, pops out a bullet and puts it on the table.” He told Morfogen: “It’s this or that.”

But Morfogen wasn’t worried. “He didn’t get the memo,” he said. “He didn’t know the most powerful people in the world were already protecting me.”

Morfogen immediately brought the issue to Coppola and Carbone. They couldn’t stop laughing.

“I walk into the club at 1 a.m. one Saturday night and [Coppola, Carbone and the LA gangster are] all sitting in the back, in the VIP room having a great time, drinking Champagne.”

“By around 4:30 in the morning they’re still drinking. I walked up to the table and I said, ‘You guys having a good time?’ I was kind of pissed. Ralph, I’ll never forget, he says, ‘Nephew, we’re having a great time,’ and he eyed me to go away.”

Morfogen got the message. “As I was walking away I heard Ralph say, ‘Let’s get down to business. I heard your offer and here’s my counter offer,’ and he took a 60-pound candelabra and hit him over the head. Then Bucky came running to me to get me out of the nightclub and put me in a taxi as this fight was going on.

That sort of drop-of-a-hat loyalty was shown to Morfogen for years to come. He knew Coppola would always have his back — which is why he was shocked when he didn’t show up to his wedding in 1998.

“At my wedding I noticed two empty chairs. Ralph and his wife never showed up. I was blown away by that. Ralph really was like my uncle and I wouldn’t go a week without talking to him,” Morfogen said.

Years later, Morfogen was informed that Coppola “went to a meeting in Harlem and never came out of the house.” That’s all he knows, even now.

Coppola’s disappearance shook him. With his silent partner gone, he took it as a sign. “I really wanted no part of it anymore,” he said of the mob life.

And, he felt like the mob wasn’t the friend to him it had once been.

“In 2005 I was really struggling — divorced, I lost my [old] business and I didn’t get any calls from any of those guys to see if I needed anything … [Ralph] would have been calling me every day,” he said.

But a few years and business ventures later, the mafia came knocking once again in 2006 by way of a Genovese associate.

The associate came on behalf of two capos who wanted “an envelope” from Morfogen, who had just gotten back on his feet.

The answer was the same he gave Gotti’s crew a few years back when he was just starting out: “Tell them to go f–k themselves’,” Morfogen said.