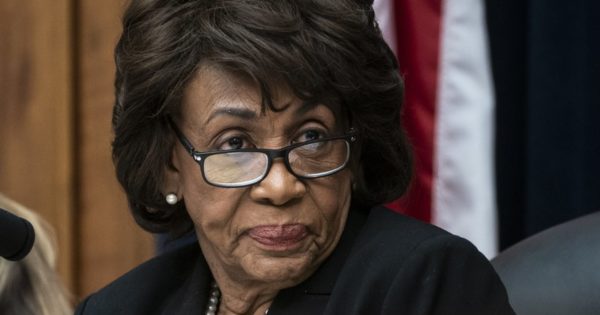 Rep. Maxine Waters, D-Calif., was seen in a recent video with House Speaker Nancy Pelosi acting very bizarre at the recent Summit of the Americas — and the footage quickly went viral.

While Pelosi addresses the audience, Waters is seen behind her with a completely blank face for an eerily long period. The song “Mad World” by Tears for Fears is played in the background of the video clip.

On social media, users replied to the eerie video with disbelief.

“OMG! I thought she was just a background portrait for a second!” wrote one user.

“The lights are on, but nobody’s home,” another said.

One user tweeted, “When you stare into the void long enough, it begins to stare back.”

“Pretty sure that’s a cardboard cutout thing,” a tweet read.

“For a minute there, I thought Madame Tussauds had set up a “Mad Max Wax Statue” in the background,” said another.

Take a look for yourself —

Waters’ office announced Tuesday that the longtime California Democratic leader had tested positive for coronavirus for the second time this year.

“Yesterday, after learning of a potential exposure at the Summit of the Americas in Los Angeles, I was notified that I tested positive for COVID,” Waters said in a statement. “I am currently isolating and have no symptoms.”

The 83-year-old Waters had previously tested positive for the virus in April. She credited the vaccines for her mild symptoms and encouraged others to get vaccinated.

“If you haven’t received the vaccine and/or booster, I encourage you to do so,” Waters’ statement said. “I am feeling fine and resting at home.”

Waters joins a growing list of political leaders that tested positive after the summit.