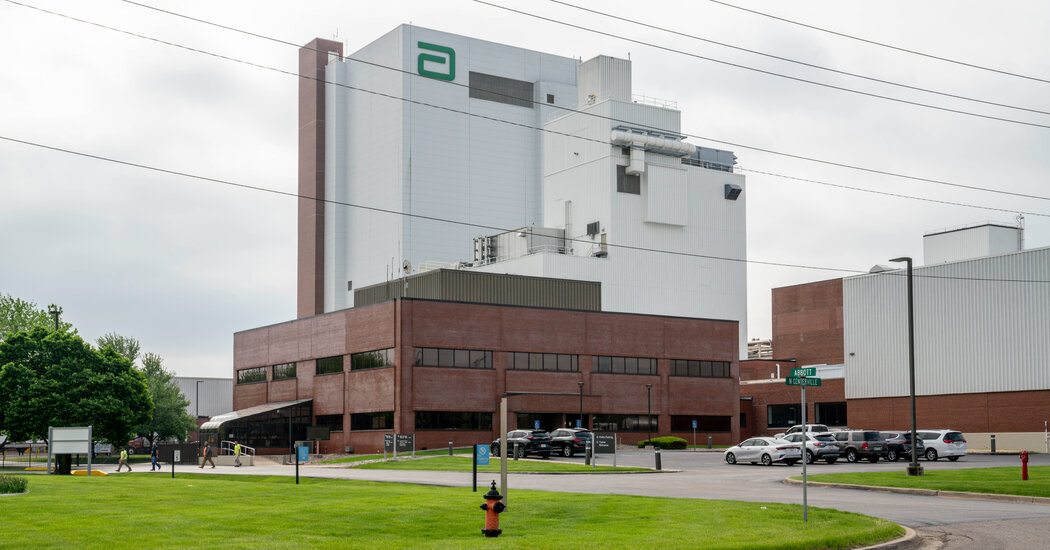 A baby formula plant in Sturgis, Mich., which resumed production less than two weeks ago after a monthslong closure that exacerbated a nationwide shortage, has again shut down after parts of the facility were flooded during a severe storm.

The company that operates the plant, Abbott Nutrition, said on Wednesday that it was forced to stop production of its EleCare specialty formula in Sturgis, one of its five manufacturing sites, after severe weather moved through southwestern Michigan on Monday.

In February, Abbott closed the plant and recalled batches of its Similac, Alimentum and EleCare formulas after the Food and Drug Administration received four consumer complaints of bacterial infections related to the formulas.

On Wednesday, the company said that it was assessing damage from the storm and cleaning the plant, which would delay production and distribution for a few weeks, but that it had sufficient supplies of EleCare and most of its specialty and metabolic formulas to meet demand until new formula is available.

“These products are being released to consumers in need in coordination with health care professionals,” it said.

Robert M. Califf, the F.D.A. commissioner, said that the agency had been informed about the stoppage but that it was not expected to have much impact, given increased imports of formula as well as production by Abbott and other manufacturers.

“While this is an unfortunate setback and a reminder that natural weather events can also cause unforeseen supply chain disruptions, I want to reassure consumers the all-of-government work to increase supply means we’ll have more than enough product to meet current demand,” he said in a statement on Twitter.

He made similar remarks in a Senate committee hearing on Thursday, saying that the F.D.A. was working closely with Abbott to get the plant up and running again “as quickly as we possibly can.”

The stoppage at the plant was the latest twist in the baby formula shortage in the United States, which started earlier this year, when pandemic-related supply chain issues, including a scarcity of some ingredients, made it difficult for parents to find formula.

After the shutdown in February, Abbott said it increased production at other manufacturing plants in the United States and at one in Ireland.

Abbott and other producers have been ramping up production as the government eases import regulations. “This means that the total amount of formula available, even before the Sturgis plant is back in production, exceeds the demand for formula prior to the recall,” Dr. Califf, the F.D.A. commissioner, said.

Navigating the Baby Formula Shortage in the U.S.

A growing problem. A nationwide shortage of baby formula — triggered in part by supply-chain issues and worsened by a recall by the baby food manufacturer Abbott Nutrition — has left parents confused and concerned. Here are some ways to manage this uncertainty:

Finding formula. If your baby’s formula was not affected by the recall, but is still not available, you can try calling local stores to ask when they expect to get it back in stock. You may also be able to buy it online. If your baby is on special formula, reach out to your doctor’s office: They might have samples in stock.

Picking a new formula. If you typically use a name-brand formula, look for its generic version. Alternatively, seek a new formula that matches the ingredients listed in your usual one. If your baby is on a special formula for health reasons, check with your pediatrician before switching.

Transitioning to a new product. Ideally, you will want to switch your child gradually. Start by mixing three quarters of your usual formula with one quarter of the new one and gradually phase out the old product. If you can’t transition gradually because you’ve run out of your usual formula, that’s OK, although you might notice more gassiness or fussiness during the transition.

What not to do. If you can’t find your baby’s usual formula, don’t make your own — homemade formulas are often nutritionally inadequate and at risk of contamination. Don’t try to “stretch” your formula by adding extra water, and don’t buy it from unvetted online marketplaces like Craigslist. For a baby less than 1 year old, don’t use toddler formula.

On June 4, Abbott said that it had resumed production of EleCare at the Sturgis plant for an expected release to consumers around June 20, and that it was “working hard” to restart production of Similac and other formulas. But that timing appears unclear after the flooding.

“Once the plant is re-sanitized and production resumes, we will again begin EleCare production, followed by specialty and metabolic formulas,” the company said in its statement late on Wednesday. “In parallel, we will work to restart Similac production at the plant as soon as possible.”

The baby formula shortage had threatened to become a political and public health disaster. President Biden invoked the Defense Production Act to increase production and authorized the use of Defense Department planes for “Operation Fly Formula.”

In May, the first in a series of international shipments of infant formula was flown into the United States under the program, to speed up imports and to start getting stock in stores. The seventh shipment takes place on Thursday when Nestlé formula is flown from Switzerland to Louisville, Ky., the White House said.