A Gull Flaps Its Wings and a Deadly Virus Explodes 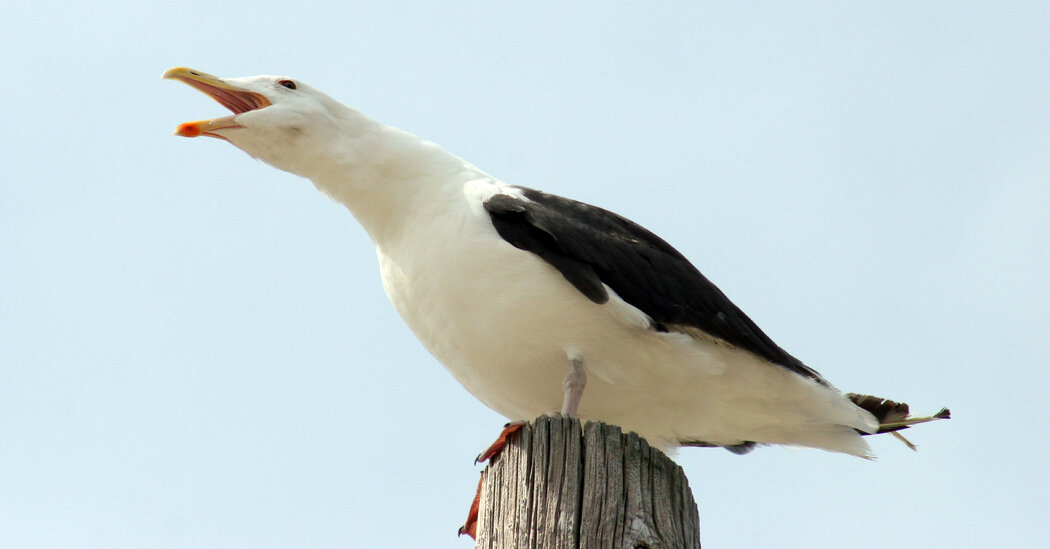 A great black-backed gull migrating from Europe to Eastern Canada last winter may have been the first carrier to North America of the deadly strain of avian influenza that has killed tens of millions of domestic poultry and devastated wild bird populations.

The wide-scale outbreaks have provided researchers with a new opportunity to fine-tune their understanding of the disease by studying which wild bird species, behaviors and ecologies play key roles in transmission.

“Previous studies looking at bird flu made these large categorizations of wild and domestic birds,” said Dr. Nichola Hill, an assistant professor of biology at the University of Massachusetts Boston and lead author of a new paper on the topic.

But “wild birds are incredibly species-rich,” she said, adding that “each of them has a unique natural history and behavior.”

Knowing which migratory species carry the pathogen, for example, can help predict when and where it might arrive based on migration routes.

After the migrating gull came ashore, the highly pathogenic avian influenza, also known as the H5N1 virus, exploded across North America. More than 77 million poultry, most raised in crowded conditions that fueled the spread and evolution of the virus, have been culled in dozens of countries.

For some experts, the toll wrought by this H5N1 strain on wild birds — it has struck more than 100 species so far — has been alarming and unprecedented in its depth and breadth. Among wild birds, the spread can be very difficult to contain, posing a greater threat of spillover to other wildlife. And some wild bird species, like cranes and some seabirds, are particularly vulnerable, especially those with low reproductive rates and those already endangered.

The World Organization for Animal Health estimates that more than 383,000 wild bird deaths can be attributed to the virus since October 2021, although the count may be a vast underestimate because of how difficult it is to track sick and dead birds.

The pathogen has spread rapidly through various regions and species, at much higher rates than during the last outbreak in 2014-2015.

“It’s impacting a bigger host range and doesn’t dead-end in wild birds like it used to,” Dr. Hill said. “It is sustained in wild birds, and that is a frightening prospect. For many of us in this field, my God, what do we do when we get spillover into a wild animal for which there is no control?”

It has long been assumed that the primary hosts for avian flu are dabbling ducks, such as mallards, teals and shovelers, that feed on the surface and just below with their rumps in the air. They are critical to the spread because they have mild or no symptoms and they carry it far and wide. The new study, however, found that other birds, like geese, played an underestimated role because of their natural history.

“Geese are a little more tolerant of human-disturbed areas,” Dr. Hill said. “Imagine a commercial poultry operation or backyard operation where they spread grain around.” That attracts “geese and other scavenging birds, like gulls and crows and magpies, so there’s an interface between them,” she said.

The unique natural history of the black-backed gull, the largest gull in the world, for example, plays a role in transmission. “Gulls were really rare hosts for highly pathogenic forms of the virus,” Dr. Hill said. “When they did carry it, those rare occasions, they spread it really quickly. There is nothing like a gull for a really rapid dispersal of the virus and really long distances. They will catch a tail wind and cross the Atlantic in 24 hours.”

The study may help other researchers track not only the continued spread of this year’s pathogen, but the paths taken by other viruses that are harmful to wildlife.

“Knowing that gulls, geese and ducks may be moving this virus in different ways is a big contribution to understanding or eventually modeling with more accuracy how to expect a virus like this to spread,” said Jonathan Runstadler, professor and chair of the Department of Infectious Disease and Global Health at Tufts University’s Cummings School of Veterinary Medicine and a co-author of the paper.

The data “allows us to predict if there’s a virus emerging, when that bird might enter North America and what bird populations we might target for surveillance to detect it,” Dr. Runstadler said.

The highly pathogenic lineage of this year’s avian flu originated around 1996, found first in a domestic goose in China. It has been circulating around the world in wild and domestic birds ever since, evolving as it travels from host to host.

In 2005, after a decade of evolution, the strain caused a large outbreak in wild birds in wetlands in China.

The strain showed up in the United States for the first time in 2014, traveling in migrating birds from Eurasia across the Pacific to Alaska and farther east, causing outbreaks at U.S. poultry farms that resulted in the killing of 40 million turkeys and chickens.

After it reached the Midwest, however, mass cullings stopped it, eliminating the viral spread for both wild and domestic populations.

“We don’t have a vaccine,” Dr. Hill said. “All we have in our tool kit is the swapping out all of our poultry, which is awful, but to some degree it was successful.’’

But killing off infected poultry hasn’t worked this time around, in part because the virus has been able to find a home in so many wild birds, spawning the largest outbreak of avian influenza ever.

In some places, officials have been warning chicken producers and even people who keep backyard flocks to keep their birds indoors, while in other places, the threat seems to have passed.

“This virus is so good because it Ping-Pongs back and forth between wild and domestic,” Dr. Hill said. “There is no better way to amplify a virus than taking a wild reservoir and domesticating a close relative. That’s exactly what we’ve done with chickens and ducks. Highly pathogenic forms of the virus only happen when the virus goes into agricultural animals.”

On Quebec’s Magdalen Islands, wildlife officials recently discovered the carcasses of thousands of white gannets that had been wiped out by the flu.

There is no way to predict whether the flu outbreaks will dwindle or grow worse.

Some species, such as raptors, seabirds and shorebirds, are also at great risk of catching the virus because of their behaviors. Dozens of bald eagles are known to have died of the flu, largely because they prey on ducks and other birds that carry the pathogen.

Birds that gather in large numbers are also at risk. “There’s a lot of flocking birds — shorebirds, terns and seabirds — that form massive, massive groups and that could just be a field day for the virus,” said Dr. Hill.

The extent of the devastation to various species is difficult to assess, because surveillance is lacking. Better tracking along migration routes would help experts figure out ways to mitigate the spread of the virus.

Deaths of large numbers of shearwaters and other seabird species have been reported along the Atlantic coast in Massachusetts, Maine, New Hampshire and Connecticut. The avian flu is a suspect, although tests have not confirmed that.

“The geographic extent of detection, the number of species that we’re getting with detections, the amount of disease we’re seeing in wild birds, this is all unprecedented,” said Andy Ramey, a U.S. Geological Survey research wildlife geneticist in Alaska who studies avian influenza. “It’s unknown territory and hard to know what to expect.”

There is also concern that during this year’s breeding season for many species, parents could pass the disease to offspring in the nest, which have underdeveloped immune systems. Young wild birds are often exposed to low-pathogenic viruses, which are common and can serve almost as inoculations, helping strengthen their immune systems.

One endangered species being monitored is the roseate tern on Buzzards Bay off the coast of Massachusetts. Testing is just getting underway, and no sick birds have been found yet.

“It does appear to be a rough food year for the terns,” said Carolyn Mostello, a coastal bird biologist for the Massachusetts Division of Fisheries and Wildlife. “Nesting has been slow. Hopefully we don’t have a combination of poor food resources and avian flu; that could act together to really injure the populations.”

Experts say the avian flu poses a very low risk to people and so far has been detected in only two humans. However, as it persists and evolves, it could gain the ability to pose a serious threat of spillover into humans.

Dr. Hill said that a major handicap to better understanding the outbreak has been the lack of funding for efforts to track the spread. “Surveillance is really, really, really bad,” she said. “We are spending very little money and time getting ahead of this.”