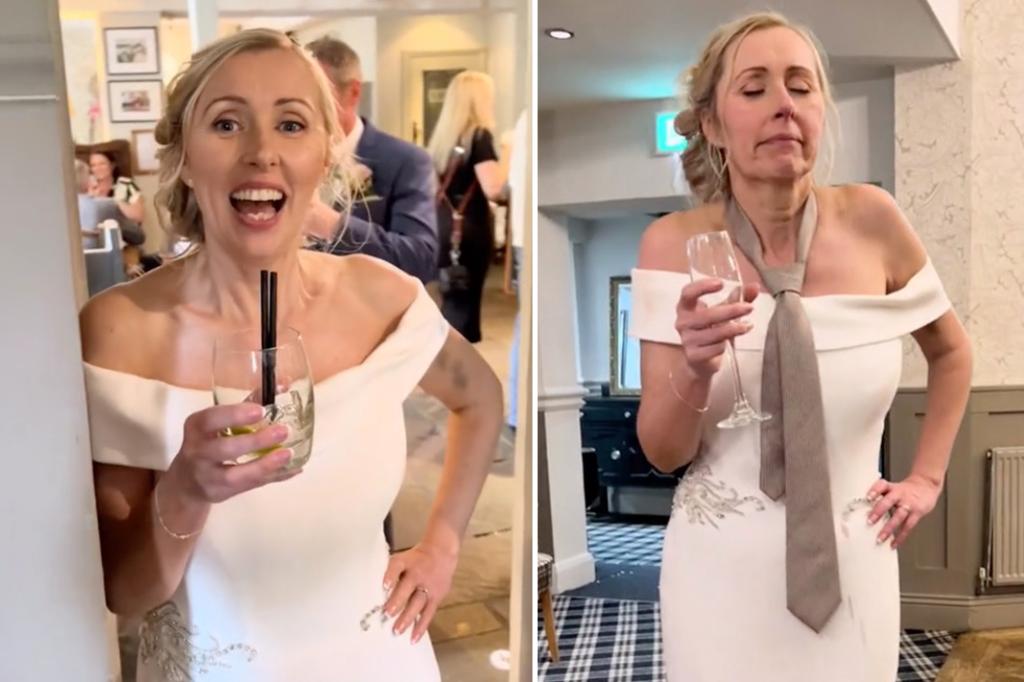 It’s enough to give you a hangover.

A bride and groom have revealed just how sloppy drunk their wedding party was in a video that’s now going viral on social media.

The couple — known only as Trev and Nicola — recently tied the knot in Sawley, England, and decided to film their guests having their first and last drinks to highlight the difference between sobriety and extreme intoxication.

The hilarious video, titled “First Drink vs. Last Drink,” has clocked up a whopping 9.5 million views on TikTok — and has even spawned a series of copycat clips.

“Hi, I’m Holly, and this is my first drink!” one of the bridesmaids is seen saying near the beginning of the video, with that footage filmed at the start of the wedding reception.

The clip then cuts to Holly at the end of the evening, with the boozy bridesmaid looking worse for wear.

“My name is Holly and this is my last drink of the night,” the brunette slurs as she sways back and forth and sports a vacant look in her eyes.

The video repeats a similar pattern with several other attendees, before it’s revealed that one guest even recorded the bride doing the same thing.

“Hi, I’m the bride and this is my first drink,” newlywed Nicola is seen saying as she holds up a gin and tonic for the camera just after tying the knot.

The video then shows Nicola at the end of the night — and she appears to be the most intoxicated person at the nuptials.

The blonde bride is unable to open her eyes or speak as she shuffles towards the camera with a final beverage in her hand.

She seems so unaware of her surroundings that she even needs to be instructed on what to say by the person behind the camera.

“I’m the bride and this is my last drink!” she mutters as her head drunkenly tilts back and forth.

Viewers were shocked by how much the alcohol transformed her appearance, with one TikToker writing: “The bride turned 20 years older when she had her last drink.”

Another stunned viewer chimed in: “The bride at the end was not the same woman was it?”

The “First Drink vs. Last Drink” videos have since started trending on TikTok.

Another clip — also filmed at an English wedding — recently clocked up more than 3.4 million views and similar shows boozy Brits enjoying their alcohol.

Meanwhile, one wedding attendee decided to do a twist on the trend, filming himself with every single alcoholic beverage he consumed over the course of an evening.

Cornforth became progressively drunker over the course of the event, eventually downing around 23 alcoholic beverages — although he repeatedly lost count due to his intoxicated state.

Cornforth later estimated that he had 14 gin and tonics, as well as glasses of Champagne, wine, Pimm’s and vodka.

At the end of the clip, he was seen battling what looked to be a severe hangover the following morning as he chugged down orange juice at postwedding breakfast.