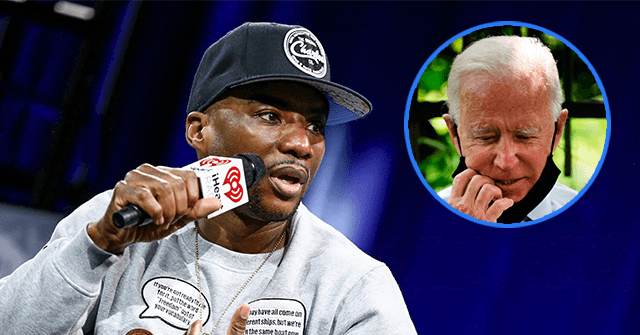 Radio host and author Charlamagne tha God suggested that President Joe Biden has dementia during Friday’s The Breakfast Club radio show. “I saw him talking to a ghost,”Charlamagne stated that, while his co-host claimed the President of America has “dementia.”

“Don’t y’all think it’s ambitious of Biden to be announcing his future plans?” Charlamagne asked, to which co-host DJ Envy responded by saying, “Do you think he should be tested before he’s able to announce that he should be able to run?”

When another guest asks you, “tested for what?”DJ Envy instantly stated, “dementia.”

“Have you seen something that suggests that he has dementia?” former MSNBC host Tiffany Cross asked, to which DJ Envy responded, “Yes,” before Charlamagne interjected, proclaiming, “I saw him talking to a ghost!”

DJ Envy, whose real name is RaaShaun Casey, continued, saying, “Yeah, he was talking to a ghost, he forgets a lot, there’s times where he looks confused, doesn’t know where he’s walking. They write things on his hand and on napkins so he knows.”

“Would you rather have Biden with dementia, or Trump with all of his issues?” Cross asked, to which Charlamagne responded, “They’re two wings on the same bird.”

Elsewhere in the discussion, Charlamagne implored Cross and Rye to “be honest for a second” and admit they don’t want to see Biden run for reelection.

The group eventually agreed that a presidential candidate should be mentally evaluated before assuming “the highest office in the land.”