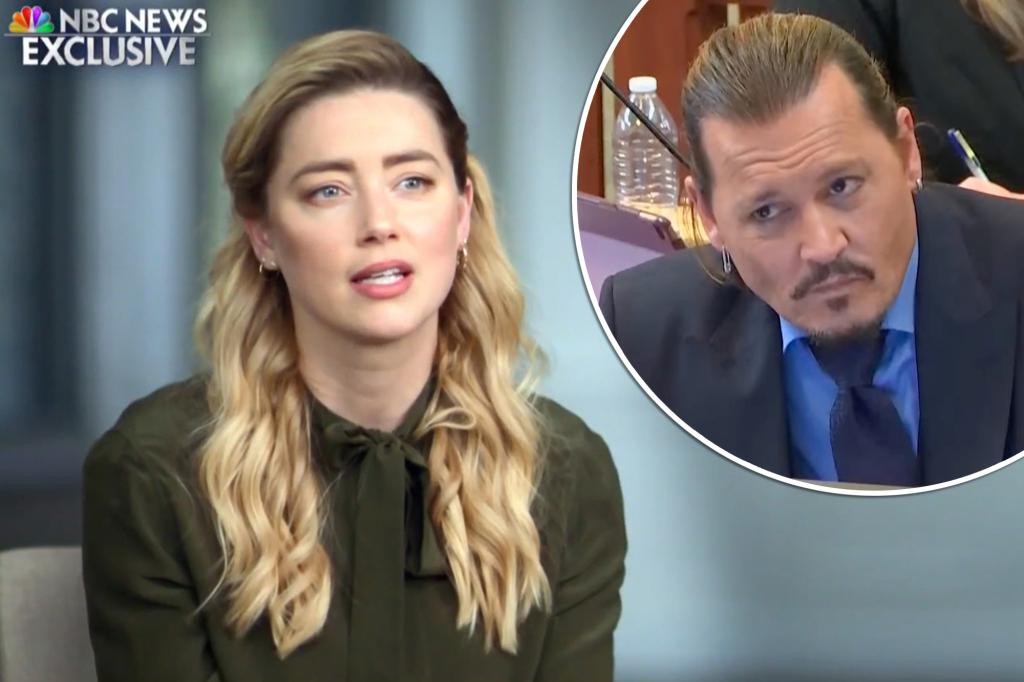 She issued an Amber alert to Johnny Depp.

Embattled “Aquaman” actress Amber Heard might’ve lost the legal battle — but she’s not conceding defeat just yet: She’s challenged Johnny Depp to do his own interview if he has a problem with her bombshell NBC “Dateline” appearance in which she’s doubling down on accusations that he abused her.

“If Mr. Depp or his team have a problem with this, we recommend that Johnny himself sit down with Savannah Guthrie for an hour and answer all her questions,” a spokesperson for Heard told The Post in a statement.

Her comments follow a 20-minute preview clip on Peacock, which showed Heard giving the NBC show numerous documents from a doctor that “represented years, years of real-time explanations of what was going on.”

“There’s a binder worth of years of notes dating back to 2011 from the very beginning of my relationship that were taken by my doctor, who I was reporting the abuse to,” Heard told Guthrie in the segment. “Her notes represented years, years of real-time explanations of what was going on.”

The documents, which are shown on-screen, detail one 2012 instance in which Depp allegedly “hit her, threw her against a wall and threatened to kill her,” according to “Dateline.”

Eight months after that, Depp allegedly “ripped her nightgown, threw her on the bed,” according to the program, and in 2013, he reportedly “threw her against a wall and threatened to kill her.”

However, Heard’s legal team was unable to admit the documents into evidence in the highly publicized trial as the judge had deemed them “hearsay.”

A spokesperson for Depp, 59, has since responded to the interview, telling “Dateline” that the “Donnie Brasco” actor simply wants to move on with his life after winning the defamation case.

“It’s unfortunate that while Johnny is looking to move forward with his life, the defendant and her team are back to repeating, reimagining and relitigating matters that have already been decided by the court and a verdict that was unanimously and unequivocally decided by the jury in Johnny’s favor,” they said in a statement.

The bombshell statements come after Depp was awarded more than $10 million in his defamation case earlier this month. A jury in Fairfax, Virginia, found Heard liable for defaming Depp in a 2018 Washington Post op-ed in which she described herself as a victim of domestic abuse. The jury also found Heard was defamed by one of Depp’s lawyers but only awarded her $2 million in damages. However, experts said it’ll be a while before the actress has to pay any money.

Nonetheless, Heard maintained in Tuesday’s interview teaser that she “stand[s] by every word” she uttered in her losing defamation trial testimony.

Surprisingly, despite the alarming abuse accusations she leveled at Depp, the star insisted that she “absolutely” still loves the “Finding Neverland” star.

“I loved him with all my heart,” the “Rum Diary” actress said about Depp. “I tried the best I could to make a deeply broken relationship work and I couldn’t. I have no bad feelings or ill will toward him at all.”