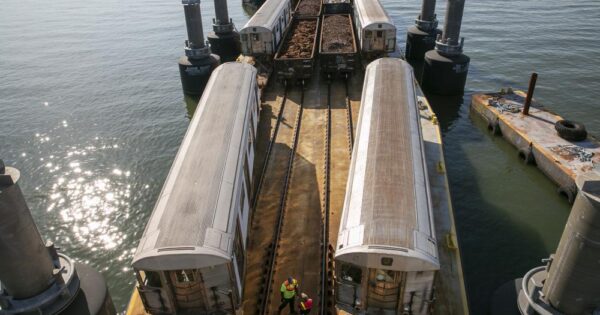 It’s the end of the line for many of the old subway cars that remain in New York City rail yards.

When New York City put R-32s into service in the mid-1960s, people called the shiny new train cars “Brightliners.” Over several decades, millions of people have traveled on R-32s, but the days when the iconic stainless steel cars were used to transport passengers are long gone.

The Metropolitan Transportation Authority, which runs the New York City subway system, has removed all R-32s from the transportation network and replaced them with newly built R-179 train cars.

The R-32s are now being floated away to Jersey City, fated to be turned into scrap metal.

Several years ago, outdated NYC subway cars were placed in the Atlantic Ocean to create artificial reefs to protect the shoreline from flooding and provide habitat for sea life. But the stainless steel trains collapsed in the salt water, so scrapping the metal is now the preferred way to dispose of old subway cars.

On a recent morning, chains held 11 of the old R-32s atop flat railway freight cars. A crew at the 65th Street Yard in Brooklyn loaded them onto a barge affixed with railroad tracks and floated them to Jersey City.

Donald Hutton of New York New Jersey Rail operates the barge, part of the Port Authority of New York and New Jersey. He said it is a fitting tribute to the R-32s that they are being removed from the city across New York Harbor on a boat with railroad tracks.

“I wouldn’t so much (call it) a ‘funeral,’ but I would say it’s more of a respectful movement out of the system,” Hutton said. “They owe it to be put out on rail.”

From Jersey City, conductors will drive the old train cars by rail to Ohio, where a scrap company will recycle or discard them for reprocessing.

For those mourning the R-32s, the company will save some of the parts for selling as memorabilia or collectibles, according to the MTA.